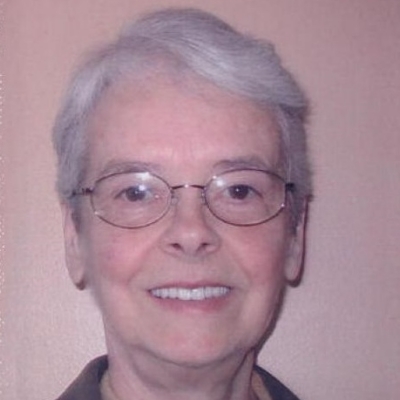 She was 89 years old, with 67 years of religious profession.

Born in Sherbrooke, she was the only child

of Horace Moreau and Hélène Gauthier.

Orphaned at the age of five, Yolande was raised by two unmarried sisters of her father. She attended the private school of the Sisters of the Holy Names of Jesus and Mary in Sherbrooke, graduating, at the age of 18, with a commercial certificate as well as seven years of music.  After working as a clerk in a hospital for six months, at the age of 19, she entered the SNJM novitiate.

Yolande received the name of Marie-Hélène, in memory of her mother, and started teaching grade one in Waterloo. By the following year, she was oriented toward teaching music, mostly at Verchères and Sherbrooke. After 25 years of teaching, studying half-time, and two years of rest, Sister Yolande was named to Maisonneuve Residence in Montreal, where she would live for almost 20 years.

There, her ministry with refugees and immigrants brought out the best in Sister Yolande. As the years passed, the children, who called her “grandmother”, matured into adulthood and stayed in contact. Yolande’s concern for the disadvantaged was a source of energy for her gift of self to others and it motivated her participation in the SNJM Peace and Justice Committee. She volunteered in the after-school and day-care activities at Centre Desjardins. She also found ways to express herself, and to share her talents, as an artist. With able hands, she created and molded shapes and colours through drawing, sewing, ceramics, hairdressing. . . . Anxious to share her faith, she collaborated in the baptismal ministry in the parish and gave of herself as a spiritual companion under the auspices of the Hochelaga-Maisonneuve CLSC. She certainly merited the following tribute:

“Yolande was a member of the spiritual accompaniment ministry to the homebound for 15 years. She was known for her characteristic way of approaching people with gentleness and attentive listening which awakened in them the desire to go deeper. She managed to reach the most reticent and gained their confidence. Through the years, she persevered despite long distances to be travelled in good weather or bad. Congratulations, Yolande, for your years of devotion and for the comfort you brought to the people you visited.”

Her volunteer work also brought Yolande into contact with the sick Sisters on the 4th floor infirmary of the SNJM Motherhouse. In May 2013, after the closing of Rouen Residence where she had lived for the previous10 years, Sister Yolande was called to serve at Maison Jésus-Marie. She answered the call to community service according to her abilities, especially as an artist. Eight years went by and Sister Yolande was welcomed into the infirmary.  Her condition deteriorated rapidly. With deep trust, she was entirely disposed to hand over her life to God.