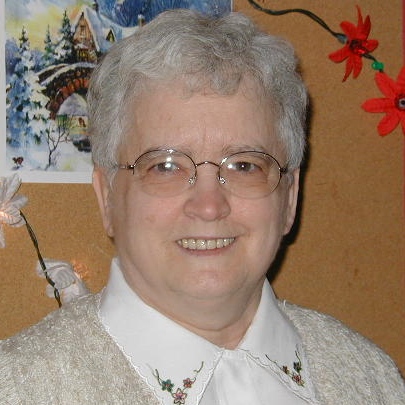 with 62 years of religious profession

Born in Montreal, Quebec, she and her twin brother were the 4th and 5th

“From the time I was 5 years of age, everything about God amazed me – the church bells, the silence of the Carmelite convent, Sunday Mass, the Sisters I met along the way, the priest who came to bless us…”  In this way Sister Micheline described her awakening to the spiritual life and her future calling to religious life. On her mother’s side of the family she had six SNJM cousins and two other cousins, one a Jesuit and the other a Marist Brother. It could be said that Micheline grew up in an environment that nurtured her vocation to consecrated life.

“My parents did not talk much, but spoke through their actions, transmitting their wisdom by example. Our working-class family valued education and lived a solid Christian faith.”

Micheline developed a joyful and ever-growing relationship with her twin. Her sister Raymonde, four years older than her, nurtured and cared for her, making her feel safe. She got to know the Sisters of the Holy Names in elementary school, and later attended High School for two years with the Holy Cross Sisters at the “Juvénat de Côte-des-Neiges”. “What a grace! Prayerful by nature, it was there that I found the necessary quiet space, where my soul could breathe deeply.”

At the age of 19, Micheline joined her older sister who was already a Sister of the Holy Names. After two years of novitiate formation, Sister Michel-des-Anges began teaching first graders at Pensionnat du St-Nom-de-Marie (Outremont Convent). Her teaching ministry spanned 30 years as a teacher, a school principal and a librarian, successively. At St-Nom-de-Jésus elementary school, she taught 5th grade for 17 years. Throughout the years, she lived with various community groups in the east end of Montreal. During that time, she directed folklore activities, initiated a project entitled ‘The History of Maisonneuve/Hochelaga’, and devoted three evenings a week to work with a craft club for 14 to 18 year olds. Sister Micheline was a dynamic and creative educator, devoted to ministry with underprivileged youth. Despite health issues, she managed to accomplish much, one task at a time.

In 1984, as principal of St-Joseph School, Sister Micheline helped facilitate its re-organization and transfer to lay administration.  In the years that followed, she worked as librarian at Mont Jésus-Marie, as local bursar at St-Hilaire Residence, as secretary of the Eucharistic Movement and of the Val-Mont province, and was responsible for writing Sisters’ obituaries. She lived in the community groups of Albani, Marie-Rose-Durocher, the Motherhouse and Édouard-Montpetit. In May of 2013, Sister Micheline was named to Maison Jésus-Marie in Longueuil. It was time to retire. She readily noted: “God takes possession of our life by taking from us everything that is not Him.” Open to grace, Sister Micheline went out to meet the One who had filled her life and now came to take her home.