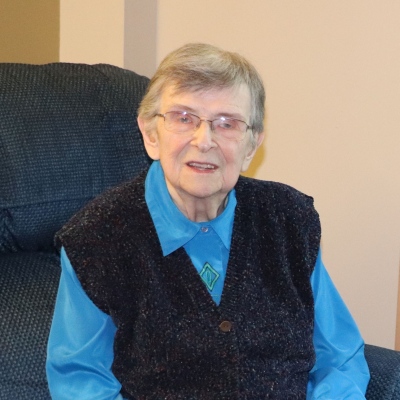 She was 91 years of age, with 68 years of religious profession.

Born in Montreal, Quebec, she was the 4th of the 6 children

When Marthe was born, her parents had already lost two of their children. They would later lose another. So Marthe grew up as a middle child, between her older brother and her youngest sister. They lived in the Maisonneuve borough, in the beautiful parish of Saint-Nom-de-Jésus, where Marthe attended Saint-Nom-de-Jésus School, directed by the Sisters of the Holy Names of Jesus and Mary (SNJM).

At home, Marthe came to know God and learned how to pray. Her father taught her about a God full of tenderness and respect, a God who lives within us. From his concrete example of participating in the St. Vincent de Paul Society during the depression, caring for someone with tuberculosis, and providing milk for a neighbour, she learnt that we cannot love God without serving and helping our neighbor. Marthe lost her father when she was 16, but the example had already been internalized. She was seven when she lost her younger sister and described the experience as “an experience of faith, of love and of acceptance”. From her mother, she learnt her formal prayers, such as the “Our Father” and “Hail Mary”, as well as spontaneous prayer. She commented on her prayer life as follows:

“Open to the Spirit, mother took me to my grandfather’s orchard and praised God for his marvelous works”; the Eucharist was part of our daily life; I learned to be still in silence before and after Mass, and followed the Mass with my Gaspar Lefebvre missal”. I still love to pray with a crowd of people, in a festive atmosphere: it gives me life. “

After completing her post-secondary studies at the École Normale de Valleyfield (Valleyfield Teachers’ College), directed by the SNJM’s, Marthe taught two years in the C.E.C.M. (Catholic School Commission of Montreal) and then entered the novitiate of the sisters who had educated her.

While referred to by her religious name, Sister Aimé-de-Marie, she revealed herself as an excellent teacher and professor during sixteen years, at the high school and college levels, first in the public schools of Montreal and then in the boarding schools of Longueuil, Outremont and Hochelaga. Attentive to the lived experience of her pupils, she helped them in their various difficulties. After two years of studies, Sister Marthe was named assistant principal, then general director at St. Lambert High School, a service of 19 years, which was much appreciated. Some of her former students would stay faithful to her until her death.

The 11 years that followed found her as provincial superior of the Mont-Royal Province, then assistant director of the infirmary. Her participation in five General Chapters, three in a service position and two as a participant, demonstrated her dedication to the community.  At the age of 68, Sister Marthe was named local superior at our St. Sauveur vacation house. Then, following a time as superior at the Sainte Martine seniorate, at 82 years, she accepted to serve in the same capacity at Pavillon Saint-André in Maison Jésus-Marie. Those were fruitful years of creative, generous, attentive and kind leadership, which contributed to the happiness of her sisters while maintaining an apostolic community thrust.

After a few years, Sister Marthe moved to the infirmary and despite her illness, “she kept her lamp lit”. With an enduring devotion to Mary, Sister Marthe prepared herself for her death. She prayed: “My God, I know that I am going to die, and that I might not have much longer to live. From this time on, please fill me with a spirit of serenity and kindness. I know that at the hour of my death, I want to have always loved you.” Once the medical diagnosis gave little time left for her to live, Sister Marthe, true to herself, renewed the offering of her life and, fully conscious, lived the following weeks with serenity, in peace with her condition. “I have never seen anyone accept her death as peacefully as Marthe did.”