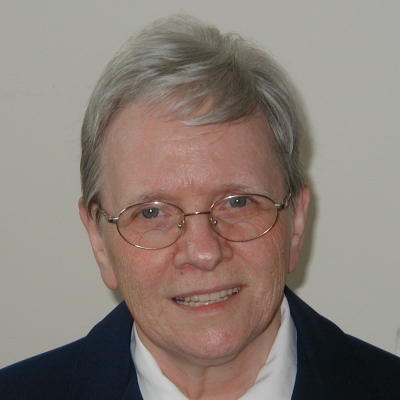 She was 89 years of age, with 70 years of religious profession.

Born in Sherbrooke, Québec, she was the 14th of the 16 children

of Arthur Vallières and Alice Blais.

Mariette was just two years old when her mother died while giving birth to her 16th child. The oldest child in the family, a boy aged 19, was followed by two other boys, and Mariette’s sisters were too young to replace their mother. “After my mother’s funeral, I was taken to La Patrie to live with my maternal aunt, Aurore Blais, and her husband, Arthur Benoît. I became their eighth child, with the idea that I would remain with them until the time my father remarried. Many years later, I asked my father if he had ever intended to remarry.  He answered me: ‘No, I would never have found anyone like my first wife. Besides, my sister-in-law, Aurore, raised her children like my wife did.’ As for me, I always kept my own family name, but I called my uncle and aunt ‘papa and mama’ and my cousins, ‘brothers and sisters.’ I received a lot of love and affection.”

Mariette grew up in a milieu of faith, trusting in Divine Providence. She kept in touch with her Vallières family. During the Second World War (1939-1945), several of the boys in both families enlisted in the army; to ensure a living wage, Mr. Benoît worked as a lumberjack and so every winter he too was away from home. “We missed the men in the family. Between the ages of seven and fifteen, I attended the convent of our Sisters of the Holy Names of Jesus and Mary in La Patrie. I didn’t like school very much because I had difficulty learning. Following this, I was a boarder at Hochelaga Convent, in Montreal, for two years. There the Sisters, who witnessed to a life of love for the Lord and service of one’s neighbor, offered me training in manual work and helped me grow spiritually. Following this work experience, I worked in a private home. but my desire was to become a religious.”

At the age of 18, Mariette entered the SNJM novitiate. “God had the first place in my heart, so I made an effort to love him in each of my companions. I can say that I had experience in all the common tasks of a housekeeper: 23 years working in the kitchen as part of a team or alone, as laundress for 50 people in Disraeli, and as refectorian at Sainte-Martine.”

Sister M.-Alice-du-Sauveur shared community life with many groups: Longueuil, Sainte-Martine, Mont-Royal Boarding School, Cartierville, the Motherhouse, Scotstown, Chalet Jésus-Marie in Saint-Sauveur, and Sainte-Émélie.  A woman of prayer, she was discreet, unassuming, a hard worker, resilient, and very kind. She developed the gift of perseverance as she dealt with people who expected her to work more quickly than she was capable of doing.

She lived longest at Sainte-Martine, where she spent 28 years and where she spoke most often about her spiritual life: her attraction to the Eucharist and to the Holy Scriptures, and the development of her love of the Virgin Mary. Her favourite Bible passages were: “It is I who have chosen you so that you may bear much fruit, fruit that will last,” and “I will not leave you orphans; I am with you always, until the end of time.”

At the age of 80 and less alert, Sister Mariette moved to the infirmary, where her health continued to gradually deteriorate. She left us, just as she had lived, quietly and totally given to God, but with one final request: “My times spent with the Lord are full of joy! . . .  When I die, I would like songs of joy at my funeral.”