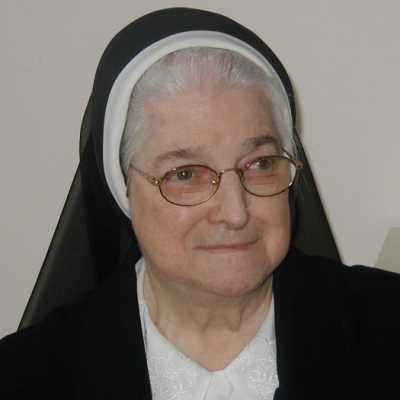 with 73 years of religious profession.

Born in Villemontel (Abitibi), Québec, she was the 2nd

of the 15 children of Edmond Dessureault and Graziella Couture.

Marie-Jeanne was born and grew up on land given to the colonists. Her father, the train station master, managed several employees. The family lived in the station, since there was no village at the time.  Her first year of school was spent in the station thanks to her father who had prepared a little school room there. The neighbours’ children came to school there too, and all the children were in the same grade since even the eldest was not yet able to write. At the age of 12, Marie-Jeanne became a boarder in 4th grade in St. Tite. During the next two years, she was a day scholar in La Tuque with the Sisters of the Assumption of the Blessed Virgin. And there, at the age of 14, she sensed the call to religious life.

At home, she noted, “The religious practices were almost heroic: rising at 4 a.m., a train ride to La Tuque, waiting at the station until the doors of the church opened at 6. During the first Mass, we warmed up, then we stayed for the second Mass. In the summer the trip was sometimes made on foot, three and a half miles with no road. My father represented the family faithfully every Sunday while the others went whenever it was possible.  As a family we recited the rosary.”

Marie-Jeanne loved school, but being the oldest girl in the family, at the age of 14, she stayed home to help her mother with the housework and the task of educating her brothers and sisters who were all close in age. “For her 21st birthday, her parents organized a big party: food and dancing.  They bought her a beautiful dress. However Marie–Jeanne said that she would not be wearing it: she had just spent a week in Montreal with her aunt who was a Sister at Outremont Boarding School,” where Marie-Jeanne had made a three-day retreat.  Accepted as a postulant, she would enter the novitiate in September of 1944.

The difficult moments did not soften her will: she wanted to be a religious. At the ceremony for the reception of the Religious Habit, she received her father’s name: Edmond-du-Crucifix.  Her first nominations had her alternating as a laundress, between the Motherhouse and Viauville Convent for a total of 28 years: long hours of hard and tiring work. Her desire was to become an infirmarian.  At 57 years of age, she finally was named to help in the infirmaries, learning through practice. During 25 years, she gave herself wholeheartedly as a nurse’s aide to the elderly Sisters in the Jésus-Marie and Sacred Heart seniorates. Sister Marie-Jeanne was well appreciated: “She is so kind!” the Sisters said. Simplicity, sincerity, serenity, and devotion marked her daily life. Good humour and witty remarks characterized her and helped alleviate the sufferings of others.

When the Motherhouse closed, Marie-Jeanne became part of the SNJM community residing with the Sisters of Providence in Cartierville. After two years she rejoined the Sisters at Maison Jésus-Marie in Longueuil. For 13 years, even in her suffering, she remained a “superbly agreeable companion”, smiling, very attentive to others and grateful for everything.

At the age of 97, she was ready to surrender her life to God through the hands of the Holy Virgin who had been her constant companion.