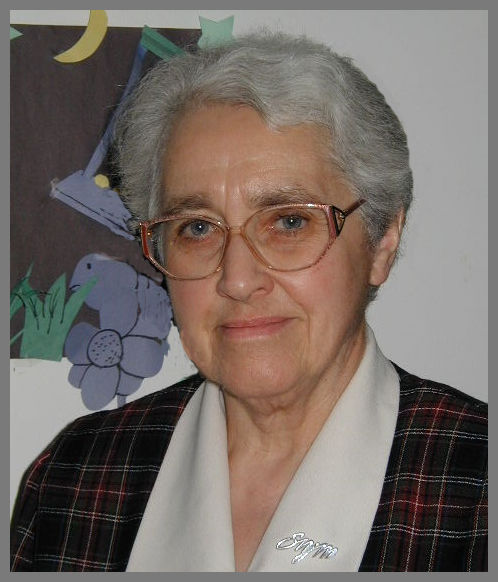 She was 92 years of age, with 66 years of religious profession

Born in Valleyfield, Québec, she was the last

of the ten children of Arthur Miron and Dorilla Charrette.

When Marie-Claire was born, she already had 8 brothers and a 17 year-old sister, the eldest of the family. She was two when their family farm was needed for the construction of the Beauharnois canal thus requiring their move to a new farm in the outskirts of Valleyfield.

“My childhood was calm, surrounded by a loving family who doted on me. Being the youngest child, I was able to attend Valleyfield Teachers’ College. After teaching for a year, I entered the novitiate of the Sisters of the Holy Names of Jesus and Mary.  I owe my vocation to my family where I learned the meaning of spiritual values, prayer and service to one’s neighbour.”

After a year and a half of formation in the novitiate, Sister Arthur-Émilien returned home to her family because of illness.  It was a difficult time for her. When she recovered, she continued her novitiate and made her profession. For 22 years, Sister Marie-Claire taught various levels of students from Grade Two through High School: Hochelaga, Verchères, St-Timothée, St-Hilaire,  Marie-Rose Boarding School, Montpetit School in St-Chrysostome. With confidence and creativity, she also animated the Eucharistic Crusade, the Catholic Students’ Association, the Movie Club, Liturgy.

When she retired from teaching, Sister Marie-Claire’s became involved in pastoral ministry. She served the diocese of St-Jean-Longueuil as pastoral assistant at St-Georges’, a full-time post she devoted herself to for six years. Her appointment as pastor of St-Urbain parish in the diocese of Valleyfield in 1983 was a first for the Church in the province of Quebec. Having the responsibility for this parish, Sister Marie-Claire experienced both joy and trials, as she fulfilled her mandate with zeal, courage and devotion for four years. Following a sabbatical year in Verchères, she worked as a pastoral minister in St-Joseph-de Granby parish, in the diocese of St-Hyacinthe. She initiated several projects there, one of which was “Albatros”, an organization which accompanied gravely ill people in the final stages of their life.

Needed at the Motherhouse, Sister Marie-Claire served as animator for the infirmaries, and accompanied the sick to various hospitals and clinics. When living at the Convent in Ste-Martine, she was driver for the Sisters and also sang in the parish choir.  Named to Maison Jésus-Marie, the quality of her presence enriched the daily life of the Sisters.  She brought comfort and support to the sick through her ability to listen with kindness and understanding.

Due to a bad fall, she quickly lost her autonomy.  Aware of her physical diminishment, Marie-Claire gratefully accepted the care she needed and remained interested in community life.  Her life, nourished by the Word and given generously without limit, paved the way to the place the Lord had prepared for her in the home of the Father.