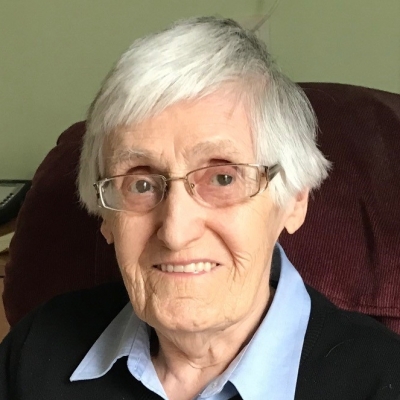 She was 90 years of age, with 70 years of religious profession.

Born in East Angus, Quebec, she was the oldest

of the five children born to

Madeleine attended the convent in East Angus, which was directed by the Sisters of the Holy Names of Jesus and Mary (SNJM). She developed her talent in music and earned her Laureat diploma, which prepared her for a Bachelor in Music. At the end of her studies, she left to teach music at Rivière-aux-Canards near Windsor, Ontario, where our Sisters lived and taught. Returning home from this experience, she entered the SNJM novitiate at the age of 18.

After her religious profession, now known as Sister Thérèse-Myriam, Madeleine ministered as a music teacher for 32 years in Verchères, Sainte-Émélie and Mont-Royal Boarding Schools, as well as Vincent-d’Indy Music School. She taught piano and all the related music courses as well as serving as a communications agent. Madeleine also taught music composition and music analysis at the University of Montreal.  From 1983 to 1988, she assumed the direction of Vincent-d’Indy. A former teacher testified:

“A person of good judgment and listening skills, with an innate goodness, she was a great educator. She knew how to motivate her staff, giving them clear instructions and always smiling… which contributes to a climate of enjoyment in a school! She had a reassuring, motherly quality about her which encouraged others’ self-confidence.”

After her time of service as Provincial Superior of the Outremont province, Sister Madeleine was named to various other ministries: person in charge of our SNJM patrimony, director of the Marie-Rose Centre, director of francophone associates, pedagogical advisor for École de Musique Vincent d’Indy, and assistant coordinator of the infirmary.

About herself, she wrote: “I recognize that I am a practical woman, concerned about reality and about what is possible. I am most comfortable when working at the grassroots level. I am wary of a multiplicity of words and, when thoughts are expressed, I prefer syntheses rather than detailed analyses.” She added: “Anything strange or foreign attracts me and my greatest utopian belief is that we can eventually live together as human beings of all races and cultures, stimulated rather than threatened by our differences.”

“Sister Madeleine had a soft spot for people of colour and they were attracted to her.  Generous with her time and her person, Madeleine developed relationships and ministered according to the needs that became known to her.”

In the year 2000, Sister Madeleine was named provincial coordinator for the health needs of the infirmary at the Motherhouse. Her ministry extended to the health care workers as well as to the sick. “With her tireless devotion in the infirmary, she was the ‘woman of the hour’, always ready, with a listening ear for everyone.” She was discreet, available and wise: her presence enriched the team. Her openness to the needs of her time and her dynamism made her effective in creating, changing or modifying new situations.”

At the end of her mandate, Sister Madeleine devoted her time to immigrant families in the Côte-des-Neiges borough and translated for the Congregational Leadership Team. After 30 years living in the Olivier community group, it was her turn to move into the infirmary. There she spent several difficult months of suffering before the Lord came to bring to her true home the one who had given herself completely to Him and to His work. May she rest in peace, light, and beauty forever.