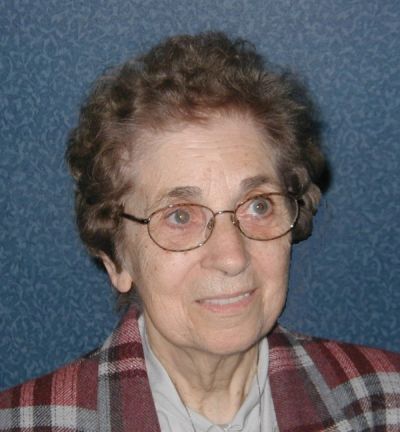 She was 96 years of age, with 72 years of religious profession.

Born in Vaudreuil, Québec, she was the older of the two children

of Adélard Séguin and Rose-Alba Rousseau.

Although of French Canadian parents, Laurette grew up in a home where English, the language of work, was also the daily language spoken by the family. Thus, Laurette learnt English from her earliest years. However, she attended French schools because her parents wanted her to go to a Catholic school.  She first attended the school in Saint-Nazaire Parish, then École de l’Immaculée in Ville La Salle, which was run by the Sisters of the Holy Names of Jesus and Mary, and where her father worked as a janitor.

After grade 9, Laurette transferred to the commercial program with the Sisters of St. Ann, while continuing her musical training in piano with the SNJM’s right up to her superior diploma. She finished her schooling at the age of 20. In her free time, Laurette made frequent visits to the Blessed Sacrament at Marie-Réparatrice, and she enjoyed helping her father with his janitorial work.  She thus got to know her former teachers better and to familiarize herself with their way of life outside the classroom. The call to religious life became clear to her at the age of 22 and she entered the novitiate of the Sisters of the Holy Names of Jesus and Mary.

Sister Georges-Adélard wanted to teach music, but her nominations as a young professed sister were to teach students in grades one to four in a regular classroom, in the French public school in Greenfield Park. Her success helped her to forget the frustration of not being chosen to teach music. At her final vows, when she was finally offered a position as a music teacher, she opted to continue as a classroom teacher.  Sister Laurette experienced great success during her many years of teaching at all levels in both elementary schools and high schools. St. Bruno School, Anastase-Forget in St. Lambert, Curé-Lequin, Saint-Léonard, Montreal East, and Chambly Regional High School all profited from her abundant energy.

And music always had a place in Sr. Laurette’s life, as she directed choirs and put on concerts. After getting her B.A. in Education, she obtained her superior diploma in organ at Vincent D’Indy Music School. An intense and organized woman, Laurette was always in a hurry and had a hard time waiting. However, a second career was already waiting for her. She was named principal of Longueuil Convent. Following that, she was named for other administrative positions at Mont Jésus-Marie and at Saint-Lambert Convent. The next seven years went by very quickly.

Sister Laurette was well aware of the needs at Edouard-Montpetit CEGEP in Longueuil, since she had given courses there. A dynamic, active, enthusiastic and energetic apostle, at the age of 66, Laurette committed herself to two or three days a week as a pastoral animator, all the while directing a choir and preparing concerts and plays. At home (Grant Residence, followed by Maison du Patrimoine), she gave piano lessons as part of the Vincent D’Indy Music School outreach program and she also volunteered at the parish.

At the age of 76, Sister Laurette offered her services for another ten years as a member of the administrative board of Phare in Longueuil, an organization designed to offer young adults an experience of relating with marginalized people.

Progressive deafness and blindness obliged Sister Laurette to reduce her activities. At the age of 89, she was welcomed into the infirmary. Generous and deeply spiritual, she found meaning in the ministry of prayer. The Our Father, along with the Liturgy of the Hours and the rosary, were her favorite prayers.  Totally given to God, she was ready to welcome Him when He came to take her home.