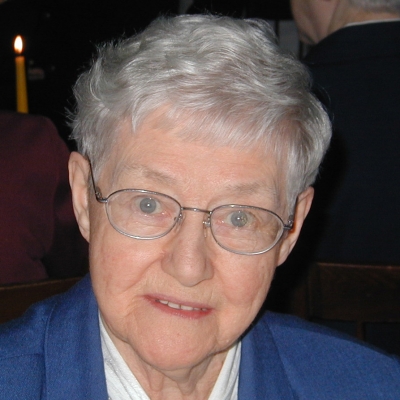 She was 95 years of age, with 69 years of religious profession.

Born in Maskinongé, Québec, she was the youngest of the eight children

of Hervé Lebrun and Mathilda Lemyre.

At birth, Julienne weighed a mere three pounds and a few ounces. Her mother had given birth to her after a busy morning doing laundry. Julienne was baptized in the afternoon of the very same day. The three oldest children in the family attended: one presented her to the priest and the other two were godparents. Julienne grew up feeling cherished by her brothers and sisters. When still very young, she preferred farm work to housework and she marvelled at nature. She attended schools directed by the Sisters of the Holy Names of Jesus and Mary: the country school up to grade 7, the village boarding school, and then Valleyfield Convent, where she was re-united with her godmother, Sister Rachel-Marie.

With her 4th year High School diploma, Julienne returned to Maskinongé and taught in one of the country schools. In her class she had 40 pupils, ranging from Grade 1 to Grade 7. After a year of this tremendous learning experience, she decided to return to Valleyfield to obtain her teacher’s diploma. The following year, Sister Cécile-de-la-Croix, a music teacher in Maskinongé, asked her to help her teach piano and also offered her the opportunity of pursuing a music degree. Three years would go by.

In January of 1950, at the age of 24, Julienne entered the SNJM novitiate. She was not in unfamiliar territory since her two older sisters, Marcelle (Sr. Rachel-Marie) and Gabrielle (Sr. Marie-du-Divin-Pasteur) had preceded her. Besides that, two older brothers were priests:  Maurice, a Dominican, and Ernest, a Blessed Sacrament Father.  Julienne confided: “For me, the Lord’s invitation was clear.” She received her mother’s name, Sister Mathilda-Marie.

While pursuing her music studies at Vincent-d’Indy and at the University of Montreal, Sister Mathilda taught piano and singing for 25 years, and also directed choirs at Collège Eulalie-Durocher (Saint-Lambert), in Beauharnois and at Marie-Rose Boarding School. When the time came for a second career, after two years in Beloeil, Sister Julienne became assistant to the provincial secretary during 13 years, while sharing in the community life at Christophe-Colomb Residence. She then became secretary to the General Director of the Motherhouse, a position she held for 15 years, living first at Bourget Residence and then at the Motherhouse. Sister Julienne loved her work as secretary. She also appreciated living in a small group.

“I really loved community and religious feast days. Eucharistic celebrations presided by priests who were friends of the group, feast day meals, community meetings, all these events have become beautiful memories! At present (1999) I am living at the Motherhouse and I am very happy. I really appreciate the beautiful liturgical celebrations. They are one of the many signs of God’s love for me, a love that draws me to love God’s Word and to desire to live it…”

The years went by in simplicity, service, discretion and prayer.  At 82 years of age, Sister Julienne was welcomed into the infirmary in Longueuil, where for 13 more years she offered herself to her Lord as a missionary of prayer.