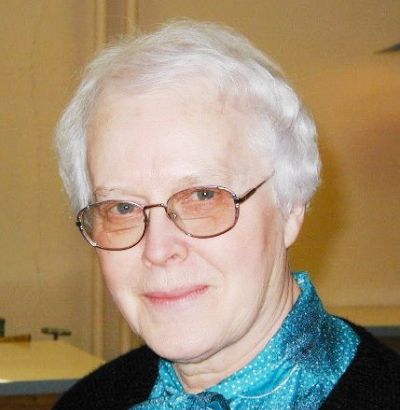 On the 7th of August 2020, Sister Jeannine Lamarche,

She was 89 years of age with 70 years of religious profession.

Born in St-Lin des Laurentides, Quebec, she was the 12th of the 13 children

of  Zénon Lamarche and Élodie Gaboury.

Jeannine grew up on the family farm where each person made a contribution. Being the second to last child, she felt spoilt by everyone. She admired her mother who was gifted in every way, just and remarkably loving. Jeannine attended the local school, and later was a boarder at St. Lin Convent, directed by the Sisters of the Holy Names of Jesus and Mary.

She entered the novitiate at 17.  At her ceremony for the reception of the religious habit, Jeannine received the name Marcella-Marie. “I felt at home from the start and I was always happy in my vocation, even though I found it hard at certain points which became opportunities for growth.”

Sister Marcella-Marie changed local communities often. She worked in the refectory at Verchères, Viauville, Outremont, St-Barthélemy and at the Motherhouse, for a total of 9 years; as laundress at St. Lambert and Valleyfield during 5 years; and as cook at St. Lambert, Beloeil and Val Morin during a period of 18 years. In each place, she also served the community in various additional roles, such as infirmarian, seamstress and receptionist, according to the need.

Sr. Jeannine’s artistic talents as a decorator were particularly recognized and appreciated at St. Émélie Residence where she also took charge of scheduling the use of the community cars for 24 years. When she arrived at Maison Jésus-Marie in September of 2017, Sister Jeannine did community service, as much as her health would permit, before moving to the infirmary due to a cancer that deprived her of her ability to speak.

A good worker, unassuming and peaceful, serene and attentive to each one of her companions, Sister Jeannine was happier in one-on-one relationships than in a group.

From her years at Beloeil, Sister Jeannine cherished the experience of Blessed Mother Marie-Rose, foundress of the SNJM congregation, being especially present to her as she climbed what was commonly known as the Sugarloaf Summit in Mont St-Hilaire. Another memorable spiritual experience was the lectio divina, or reflective reading, of Exodus 33:18-24 (God conversing with Moses): “That text made me understand a lot of things,” said Sister Jeannine who did not explain further. . . except to say that she felt loved by God.

During the few months before her death, lived in solitude and silence due to her illness, she continued to contribute to the community through beautiful drawings that one by one, embellished the wall of one of the hallways of Maison Jésus-Marie. In this way, Sister Jeannine, who left to contemplate her God, remains ever present among her Sisters in community.