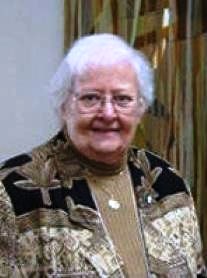 On the 1st of January 2019 Sister Jeannine Cornellier,
in religion, M.-Yolande-Marguerite,
went home to God.

She was 88 years of age, 68 years as a vowed religious.
Born in Montreal, Quebec, she belongs to a family of 11 children,
6 of whom died at an early age, making her the 2nd of 5 living children of
Charles-Auguste Cornellier and Aline Gravel.

Jeannine started her primary school studies at St-Clement’s in Viauville in Monreal, then continued in Repentigny. She attended the Epiphanie Boarding School for her secondary school studies as well as home economics. An ardent member of the Young Catholic Students’ movement, she participated in large gatherings about “leisure and health” in Joliette and Montreal. Her schedule, even during the summer, included daily Mass. At home, she helped her mother.  From the age of 15, Jeannine was attracted to the life of her teachers, the Sisters of the Holy Names of Jesus and Mary. Her desire was confirmed during a retreat with Cardinal Paul-Emile Léger confirmed her desire.

She entered the novitiate at the age of 17. At her taking of the habit, she received the name M.-Yolande-Marguerite, a tribute to her two younger sisters.  She speaks of her six first years of teaching in Cherrier and Saint-Anselme as:“A beautiful experience with children of grades 2, 3 and 6 “.

Following her studies to become a dietitian, she enthusiastically shared her knowledge for 5 years at the Institut de Pédagogie Familiale, then for 5 more years at the Faculty of Medicine at the University of Montréal. Sister Jeannine was professor at the Quebec Institute of Tourism and Hospitality for 25 years.  She was delegated to direct the organization of the pedagogical services of the Lycée professionnel hôtelier d’Abidjan, on the Ivory Coast, in Africa, a task she did for 4 years. A dream of her youth came to reality!

Upon returning to Québec, she continued her work as a pedagogical counsellor. At the SNJM Motherhouse, she was responsible for the kitchens as a professional dietitian for the Congregation.  With her energy and dynamism, she assumed services of leadership: member of general and provincial chapters, and group animator. She also served as a driver when needed.

“During her 30 years of retirement, Sister Jeannine was committed to the Religious Association for the rights of women (ARDF). Her openness to the universe made her sensitive to the needs of the world of today.”  ARDF testifies: “We give thanks for her enthusiasm, her tireless determination to give concrete reality to the calls that touched her heart, notably the cause of women, so that they might attain justice and dignity.”

Sister Jeannine was getting around with the help of an electric scooter a few days before her health rapidly declined and she died soon after. All her life, she was faithful to her profound conviction:  “I entered the community to give and never to expect anything in return. We belong to God, for the sake of others. What a joy to be able to live our ideal profoundly to the very end, giving one’s all for the Sisters.