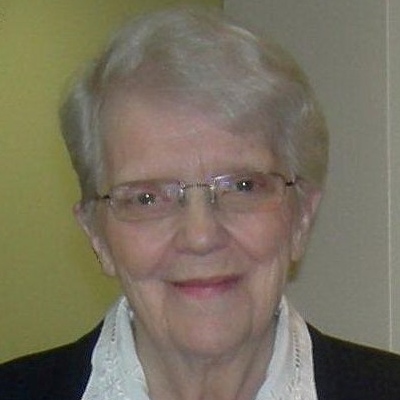 On the 11th of September 2020 Sister Jacqueline Cossette,

She was 91 years of age, with 67 years of religious profession.

Born in St-Eustache, Québec, she was the last of the five children

Jacqueline grew up with a sense that she was deeply loved by her father who was a professor of agriculture and by her mother who had a big heart and excelled in domestic arts.  Jacqueline shared this memory: “I was five years old sitting on my little chair next to my mother who was knitting; like her, I had my knitting and she was showing me how to do it: she knew how to do everythng!”

In St-Eustache and in Ste-Anne-de-la-Pérade, Jacqueline was educated by the Sisters of the Congregation of Notre Dame. She walked to catechism classes taught by the curate, Father Léonide Joinville, the brother of Sister Marie-Fidèle, SNJM. Jacqueline also had, on her father’s side, an aunt who was a Sister of the Holy Names, Sister Marguerite-de-France, and two cousins, Sr. Marie-Blandine and Sr. Jean-Gabriel.

Her pastimes were those of the day: bicycling, roller skating, skiing, choir, Catholic Action, and  ice-fishing. She lived in Ste-Anne-de-la-Pérade where tommy cod ice fishing is still a well-known activity in the winter. When she finished her studies, Jacqueline remained at home: “My father did not want me to work outside the home since my health was fragile.”

Jacqueline first heard the call to religious life when she was 15, and then again at the age of 18. When she reached the legal age of 21, Jacqueline left her family home to enter the novitiate of the Sisters of the Holy Names of Jesus and Mary. “I cried a lot at first – until they gave me the responsibilities of being bell-ringer and of mending coiffes. I was good at working with my hands: sewing, drawing, decorating bulletin boards. ”

At her ceremony of reception of the holy habit, Jacqueline received the name M.-Marguerite-Bourgeoys, in honour of her mother and of the religious sisters who had taught her. As a young professed, Sister Marguerite was nominated to teach elementary-school children of grades 4 to 7. She was also in charge of the sacristy, the singing and the Eucharistic Crusade in the schools of Beloeil, St-Timothée et Ste-Philomène. After final vows, she was named course mistress in Mont-Royal, Valleyfield and Marie-Rose Boarding Schools. Sister Jacqueline succeeded very well: the pupils were happy, appreciating the teacher who also taught them sewing and arts and crafts. Fourteen years passed quickly. Then, after a year of special training, Sister Jacqueline was asked to be director of group living at the Nazareth Institute, the only Quebec francophone rehabilitation center focusing exclusively on those visually impaired. There she devoted herself to the blind for three years and, at her departure, the general directrice gave the following testimony: “Jacqueline is endowed with an exceptional personality, which includes a sense of responsibility, professional ethics, social skills, discretion, a superior work ethic, and a spirit of collaboration with her superiors.”

During the 16 years that followed, Jacqueline worked as a social counsellor with Centraide, at the Referral Center of Greater Montreal. She was much appreciated in this full-time ministry while she shared community life in Édouard-Montpetit Residence, followed by Marie-Rose-Durocher Residence. Successively, she was involved in community service as assistant to the provincial superior and as the local superior, much to the delight of the sisters. After four years as superior of one of the groups at the Motherhouse, Sister Jacqueline returned to Marie-Rose-Durocher for another 17 years, often serving as a member of the local coordinating team. Gradually losing her personal autonomy, she was welcomed to the Longeuil infirmary in 2017.

The Lord came to get her in her sleep, she who had so faithfully “kept her lamp lit for the bridegroom’s return”.