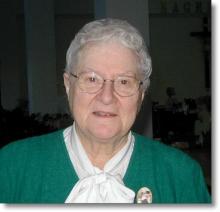 “I have come that they might have abundant life.”

January 21, 2009, Sister Françoise Lefebvre
her religious name, M.-Gilles-Bernard,
went home to God at the age of 87.
She was professed for 65 years.
Born in Côteau-Station, Quebec,
she was the daughter of Jean-Baptiste Lefebvre and Joséphine Bériault
and the eldest of four brothers.

Sister Françoise never went unnoticed because of her initiative, her eagerness and her easygoing style. As a high school and CEGEP teacher, she encouraged research, learning, and culture. She was a strong believer in extra-curricular activities that she facilitated for over 30 years. She was also instrumental in starting the Gaspé Cathedral Choir for which she received recognition and praise, among many other achievements, by the people of Gaspé who attended her funeral.

Named Provincial Superior of the Maisonneuve Province, she guided with creativity and enthusiasm.  Sister Françoise was among the first to openly support the commitment of the SNJM Associates.

Eventually, she moved to the St-André Residence in Longueuil, Quebec. Despite her illness, she became a member of the house choir and continued to be her friendly, outgoing self. Although she died quite unexpectedly, Sister Françoise was certainly ready to meet the One whom she loved.