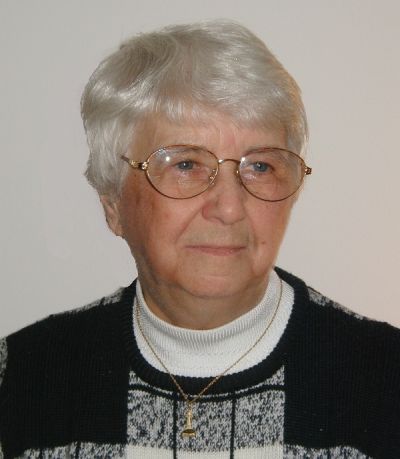 On the 4th of December 2020, Sister Fleurette Deneault,

She was 98 years of age, with 77 years of religious profession.

Born in Hemmingford, Québec, she was the last of the five children

Fleurette grew up with only two older brothers, since two others had died before she was born. She first went to the local school for her primary education, and then to Saint-Chrysostome Convent where she got to know the Sisters of the Holy Names of Jesus and Mary. From her parents, Fleurette learnt the value of hospitality and openness to others. To help on the farm, the family had hired a man who was intellectually challenged. On a daily basis, Fleurette practiced respect for others, generosity and kindness, all of which became hallmarks of her character.

Fleurette was first attracted to religious life during the visit of a White Father from Africa. She felt a strong call and so started praying for a deeper understanding of her vocation. “From that meeting when I was 14 years old, the idea of becoming a religious stayed with me right up to the time I entered the Congregation of the Sisters of the Holy Names of Jesus and Mary on the 24th of January, 1941.”

Fleurette received the name Sister M. Lambert-Joseph. Her first 14 years of teaching were devoted to grade 3, 6, and 7 students in Mont-Royal and Marie-Rose Boarding Schools. After two years of studies, she taught Secondary 1 and 2 high school students at Sainte-Veronique and Marie-Immaculée in Monteal. Then she served as assistant principal at Sacré-Coeur in Sainte-Martine. While working as a homeroom teacher, she was also served as assistant for several youth movements: The Eucharistic Crusade, Cadettes of the Sacred Heart and Young Catholic Students.

“My most precious apostolic commitment,” wrote Sr. Fleurette, “in line with my concern for the poor and disadvantaged. was the opening of a transition house for women in difficulty,18 years of age and older.  The project lasted 12 years and 90 young women benefitted from it. I had the privilege of offering them not only food and shelter, but also a listening ear, attention, affection, and a `joie de vivre` which comes from a discreet formation based on both tenderness and firmness.”

When the transition house closed, Sister Fleurette, attracted as always to the disadvantaged, offered her services to Maison Marguerite, a shelter and day centre, run by the Grey Nuns, for street women. She continued there as a volunteer for 15 years. Along with this much appreciated service, she joined the baptism preparation team at her parish, and also provided a pastoral presence at our SNJM Saint-Charles infirmary.

When her health began to fail, it was her turn to be welcomed into the infirmary where she remained a smiling presence, interested in others, grateful for the care she received until her very last years. She confided: “Jesus calls me: `Take up your cross and follow me.  Be a saving presence.’ Day by day, with difficulty and with love, I unite myself to him, following his call to: ‘Love others as I have loved you.’ ”

Sister Fleurette, at the age of 98, was ready to meet her beloved Jesus!