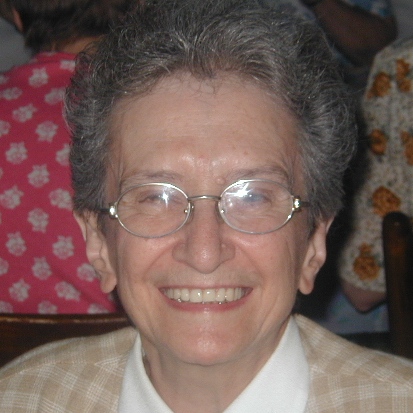 She was 89 years with 66 years of religious profession.

Born in Saint-Sulpice, Québec, she was the 2nd of the three children of Édouard Amyot and Yvonne Robitaille.

Denise’s father worked as a gardener and florist at the Botanical Gardens in Montreal. As a child, she studied at Sainte Véronique School in Montreal, administered by the Sisters of the Holy Names of Jesus and Mary. After her family moved to Verchères, Quebec, she obtained her 7th grade certificate, and then completed her 9th year at the Verchères boarding school, also administered by the SNJM Sisters.  It was during this last year in school that her mother fell gravely ill and died of cancer.  Denise, at 15 years of age, took charge of the home, the cooking and the care of her 10 year old sister. She bravely took on these new responsibilities. Tenacious as always, after a year, she obtained permission from her father to pursue her studies in Beloeil, followed by a year at the teacher’s college in Valleyfield.  With her superior diploma under her belt, she taught for a year and, at the age of 20, entered the SNJM novitiate and received the name Marie-du-Saint-Nom-de-Jesus.

Sister Denise taught in elementary and secondary schools for 22 years, during which she pursued studies in philosophy and psychotherapy. Her students learned to the importance of work well done and were always prepared for their following year. Sister Denise participated in the community life of several residences: St-Léonard, the Nativity, Saint-Nom-de-Marie Boarding School in Outremont, Saint-Nom-de-Jesus in Longueuil and Durocher College in St. Lambert. Following these years she became director of initial formation for the SNJM province of Longueuil, and was in charge of the course in psychotherapy for the formation of pastoral animators at Centre Saint-Pierre.

After serving a six-year term as provincial superior in the province of Ville-Marie she returned as a professor and mentor to students at the Institute of Integral Human Formation of Montréal (I.F.H.I.M.), a position she held for close to 20 years. During this time, while living community life at St-Hubert Residence, she travelled to Europe and Haiti for her work. Denise later moved to Marie-Rose-Durocher Residence until its closing in 2019. She was greatly appreciated as warden and president of the parish council of St-Arsène Parish which was across the street from the residence. Sister Denise was highly organized and did not like improvising: she carefully prepared, in detail, each meeting, sharing, course, conference. She filed every document that could be of use.

At 89 years of age, even when her body was giving her warnings, Sister Denise would not retire from active life. As a member of the St-André community at Maison Jésus-Marie, she occasionally met people for spiritual accompaniment.  However, just a few months after her arrival in Longueuil her physical stamina rapidly declined. Even in the infirmary, she did not give up. Denise tried to keep her familiar daily routine of prayer and personal care which filled up a good part of her day.  She was always pleased to welcome visitors and always hoped to recover. However, Jesus had decided that she had fulfilled her mission. On the feast of the Annunciation, He came to take her home and without doubt she answered: “Here I am, Lord.”