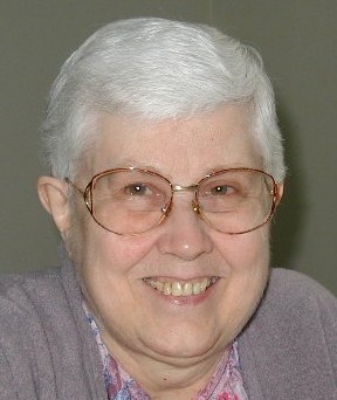 “For the mountains may fall and the hills be shaken,

She was 93 years of age, with 73 years of religious profession.

Born at Lake Orford, Quebec, she was the third of the six children

Claire first attended the local school, which was so far from the family home that she was unable to attend during the winter. When she reached grade 5, she went to Sacred Heart School in Waterloo, which was directed by the Sisters of the Holy Names of Jesus and Mary. “It was there that I really started to learn anything. In grade 7, Sister Jeanne-du-Carmel asked me to join the YCS (Young Catholic Students). I believe that it was from that moment that Jesus Christ became  important in my life. After grade 9, sometime during the 1939-1945 war, I worked in a munitions factory for nine months. This experience was a maturing one that inspired me to continue my studies.” So she registered for high school courses at Maplewood Convent. As soon as she finished High School, at the age of 18, she entered the SNJM novitiate of the Sisters she knew so well.

At the ceremony marking the taking of the holy habit, Claire received the name Julien-de-la-Croix. After first vows, she started her teaching ministry with elementary and secondary students, a ministry which would last 31 years. She served in the following boarding schools of Quebec: Saint-Lambert, Hochelaga, Valleyfield, Outremont, Mont-Royal, and Longueuil. At the same time, Claire served as assistant in the Young Catholic Students movement and pursued her university studies, specializing in the sciences, especially Chemistry and Mathematics.

Her dynamism, her sense of humour, her hard work, and her flexibility made her very popular with her students and her colleagues. For her last nine years of teaching, Sister Claire opted to teach in one of the most multicultural public schools of the Montreal School Commission (CSDM), namely, Saint-Luc High School in the Côte-Saint-Antoine district. There she taught religion and morality and ministered as animator for student life for the students of Secondary 3, 4, and 5.

During her last years of teaching, Sister Claire experienced living in small groups: at the residences on St. Joseph Boulevard and Dufresne Street, as well as at Notre-Dame-de-Bon-Secours Residence. In 1980, at the age of 53, she had a turning point in her professional life: oriented towards the working class, she decided to work in a factory as a day laborer at Regent Industries, for a salary of $3.68/hour. She stayed there for four years, sharing community life with companions who were also committed to social justice and helping the disadvantaged. The following two years found her living in Lachenaie and Davignon, collaborating in various community projects, such as “Le P.A.S.” and the “Manoir des jeunes”.

She was then missioned to Albani Residence as superior and later to Valleyfield Convent where she was local assistant and rendered multiple services. Then, the Mothehouse requested her help in the finance department, where she worked for 12 years, taking charge of the employees’ payroll. In 2012, Maison Jésus-Marie welcomed her; soon after, she moved into the infirmary.

There, most of her time was devoted to the prayer ministry. Sister Claire kept her sense of humor and lived serenely the gradual decline in her health. Tenderness and the love of God nourished her prayer and her daily life. Liturgical prayer fed her soul and increased her acceptance of God’s will. Sister Claire, at 93 years of age, was ready to meet her God for an eternity of bliss.