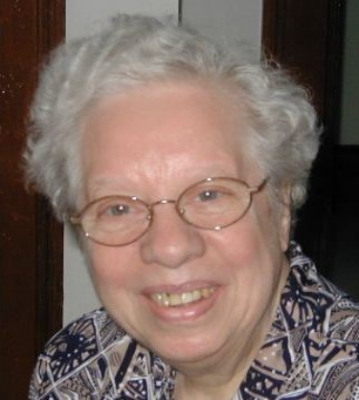 She was 93 years old, with 73 years of religious profession.

Born in Lesage, Terrebonne, Québec, she was the oldest of the four children

Aline was baptized in Saint Jerome Parish. Her father was a farmer and an excellent handyman.  Her family moved to Saint Jerome when she was four years of age. She attended the small schools in Saint-Jean-Baptiste, Saint-Louis, and Labelle where she got to know the Sisters of Saint Anne. In 1941, the family moved to Montreal, where Aline completed grades 8 and 9 at Saint Clement School, with the Sisters of the Holy Names of Jesus and Mary. She liked studying and succeeded well. At the age of 15, she found a job in a Pepsi-Cola plant, a job that was very tiring.

After obtaining her commercial diploma, Aline found office work for wholesale grocers. As a member of the YCW (Young Catholic Workers), she enthusiastically took advantage of the formation the group offered. “For me, it was a school of formation in prayer and Catholic action.  From a young age, I felt attracted to religious life.  In the YCW, I had a spiritual director, and after three years, at the age of 18, I entered the SNJM Congregation.”

At her ceremony of Reception of the Holy Habit, Aline received the name Sister M.-Charles- André. While teaching in several schools in Montreal, she continued her studies.  She loved whatever she did.  Her extra curricular activities with the students were: the Crusades, the YCS, the Children of Mary, the school co-op, etc. In the course of 17 years, she taught from grade 1 elementary to grade 9, in the department of sciences. Her classes were lively, animated and captivating. However, her aptitudes and the needs of the community led her to university studies in medical technology.

After a practicum at Hôtel-Dieu Hospital as a medical technician, Aline was given responsibility for the laboratory at the SNJM Motherhouse. She dedicated herself to this profession for nearly 40 years.  Faithful to her formation as a YCW, she confided that the prayer she learned in that movement accompanied her throughout her religious life: “Lord Jesus, a worker like us, grant me, as well as my Sisters, the grace to work with you (…) to give my strength and my time for you.  May your will be done in factories and workshops (…), in schools and in offices (…).  Deliver us from injustice, from envy, from all evil and sin…”

In her various local communities, the Jésus-Marie Group, Martin Residence, and Melodie-Dufresne Group, Sister Aline was often the animator. While responsible for a group of Associates for more than 20 years, she was also a provincial councillor, and then assistant director of the infirmary. Sister Aline acknowledged how St. Ignatius’s Spiritual Exercises in Daily Life helped deepen her attachment to Jesus, to the Church, and to the community. She added, “Life in small groups gave me the opportunity to grow, to become more tolerant, to improve my listening skills, my understanding.  From the community perspective, I gave a lot of myself, serving on various committees. I was enriched by everything and I live in thanksgiving and in hope for the future.”

After living at the Motherhouse, Sister Aline was missioned to Sainte-Martine and then to Sainte-Emilie, where she gladly assumed her share of community services.  When she was welcomed into the infirmary, she remained a good companion and bravely lived the difficulties of her daily life.  She kept her simplicity, her openness to others, her spirit of prayer, and her good humour. A hymn that nourished her soul was “Virgin Madonna, I entrust myself to you”. She was ready for the call of her Master who came to take her home at the age of 93.