Sisters of MJM Take Part in the Campaign against Human Trafficking 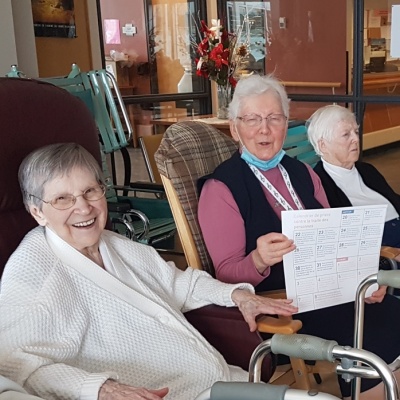 The sisters residing at Maison Jésus-Marie (MJM) participated enthusiastically in the 500 Actions against Human Trafficking in 20 Days campaign. On a collective basis, there were at least 268 actions taken, 88 of which were educational and 180 prayerful. Congregational Leader Sr. Linda Haydock aptly noted, “It’s amazing what they accomplished at MJM when they are 85 years old and older!” 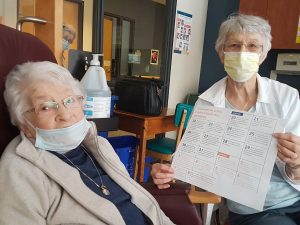 On each floor of the Saint-Charles Pavilion, sisters participated in individual and group activities. For example, before Vespers, there was the daily prayer intention. For three groups of Sisters, each intention also provided a focus for discussion to deepen their understanding of the topic.

During this campaign, which began on January 20, the majority of the residents of this pavilion watched five videos on the subject of human trafficking. These clips were diffused by means of closed circuit television before the daily Mass.

To encourage participation, those in charge of animation posted, on the walls and bulletin boards around the pavilion, the Campaign’s calendar, which suggests prayers against trafficking for the 20 days from January 20 to February 8. The same calendar was also distributed in many of the sisters’ rooms.

A Similar Approach at Saint-André Pavilion

The sisters at the Saint-André pavilion also participated both collectively and individually. Like their counter-parts at Saint-Charles, they prayed daily for each of the intentions on the calendar and viewed five videos during these 20 days.

On February 8, the final day of the campaign, and also the International Day of Prayer and the Feast of St. Josephine, the sisters from both pavilions came together for the celebration of prayer prepared by the Talitha Kum network. The celebration took place in the chapel for those who could attend in person, while those who were not as mobile were able to participate by means of closed circuit television.

In addition to all these activities, some sisters have taken personal initiatives to deepen their understanding of the issue and some have signed a petition to the Quebec government to adopt an action plan against trafficking put forth by the Comité d’action contre la traite humaine interne et internationale (CATHII –  Committee for Action against Internal and International Human Trafficking).

As a whole, this was a beautiful demonstration of the impact of the concerted efforts of a community group following the example of Mother Marie-Rose at the beginning of the congregation in 1843.