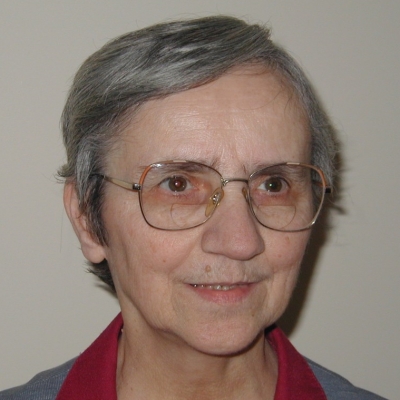 She was 85 years of age, with 65 years of religious profession.

Born in Saint-Maurice de Champlain, Québec, she was the 6th of the 12 children

of Alphonse Paquin and Yvonne Bussières.

Olivette grew up on the family farm and attended the country school, Saint-Jean. In winter she went tobogganing with her neighbours on the nearby slopes. Around the age of 15, she wanted to offer herself to God in religious life, but the pastor counseled her to wait. So she worked in private homes, then as a receptionist and in a bag factory.

“I consulted an Oblate of Mary Immaculate priest to help me choose my vocation, which led me, at the age of 17, to enter the postulate of the Sisters of the Holy Names of Jesus and Mary, in Outremont. Upon entering, I was surprised to learn that there were two separate novitiates: one for choir Sisters and the other for coadjutrice or lay Sisters. As a lay postulant, I felt set apart from the others. However, I finally accepted this, since I had made the decision to do God’s will.”

Following her profession, Sister Angèle-du-Bon-Pasteur worked as a cook in many convents: Marie-Rose Boarding School, the Motherhouse, Laflèche, Saint-Sauveur-des-Monts, Jésus-Marie Residence. She also helped as refectorian and laundress. Twenty-three years went by. Sister Olivette had a cheerful temperament, loved to sing, and related well with people. Because she was so interested in people, she was especially happy when she was named to work with the sick. Father Cadieux, the pastor at Verchères, stated:

“The sick and shut-ins greatly appreciated the presence of Sister Olivette, who visited them and brought them Communion. During the diocesan Renew program, Sister Olivette led one of the small faith-sharing groups. She knew how to proclaim the Word of God. She was also a member of the hospitality committee at Sunday celebrations and knew how to listen attentively to the elderly and the sick.”

As a personal care attendant at the infirmary in Verchères, and later at the Motherhouse, Sister Olivette was in her element.  This was what what she preferred to be and do. She also worked as a volunteer at Manoir Trinité CHSLD (Long-Term Hospital Centre) for seven years. When she lived at Rose-Eulalie, Boucherville, and Sainte-Émélie residences, she rendered many community services, always preferring visiting the sick.

In 2012, Maison Jésus-Marie welcomed Olivette into the infirmary. She and her sister Lucette would walk hand in hand in the hallways, happy to sing together and to meet other people.  Even when her strength and memory diminished, she remained joyful and prayerful right up to the day God came to take her home.