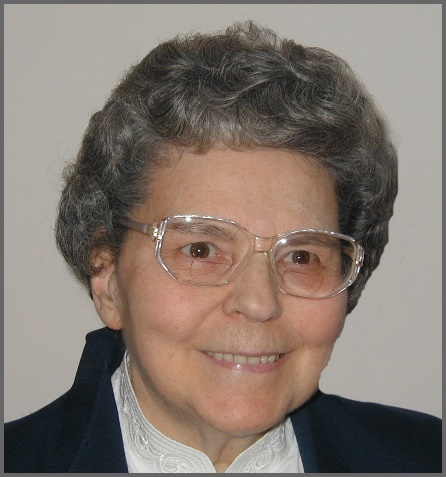 On the 18th of August 2018, Sister Gisèle Marcil,
in religion M.-Jean-Claude,
went home to God

She was 92 years of age and had been professed for 64 years.
Born in Montreal, Québec, she was the 4th of the 5 children
of Rosario Marcil and of Lucrèce Raymond.

Gisèle grew up in Montreal, in a humble family, rich in faith and love. She described the family climate as “airy, open to the beauties of nature and to the riches from above”. After her primary studies in Baril she went to Ste. Émélie boarding school directed by the Sisters of the Holy Names of Jesus and Mary.  Following her graduation, she lived at home for six years, helping her mother and participating in various Catholic movements such as the J.I.C. (Independent Catholic Youth), study circle, and others.

Gisèle entered the SNJM novitiate at the age of 25, where her oldest sister was already professed. At her taking of the habit, she received the name Sister Jean-Claude, after two of her brothers. For 35 years, she taught the little boys in the primary classes at Saint Lambert Convent, Anastase Forget, Mont Jésus-Marie, Longueuil Convent and at Lajeunesse School in Ville Lemoyne. She loved those children and gave the best of herself to them.

From the age of 65, Sister Gisèle, living at the Motherhouse in Outremont, was responsible for one of the community groups and also helped at the medical clinic. When her eldest sister was confined to her bed at the infirmary, Sister Gisèle provided her with an assiduous presence. She retired at Maison Jésus-Marie in 2009, where she devoted her time into community service and to prayer. She accepted the progressive levels of care that she needed, expressing with ease, her gratitude for the slightest help she received.

“Sister Gisèle appreciated her students and everyone around her. She remained close to her family and carried the intentions of each one in her prayer.”  “For her, religious life was a privilege; Christ’s renewed and persistent call to ‘Come follow me’, inspired her gratitude.”

Sister Gisèle can now express her gratitude for her life, face to face with her Lord.