A Musical Heritage for the Young

Born Marguerite Marie Alice Cartier February 4th, 1918, Rhene Jaque began studying music in her hometown of Beauharnois. This was followed by more intensive studies at the Ecole de musique Vincent-d’Indy in Montreal. She studied with many influential composers such as François Morel, Jean Vallerand and Marvin Duchow but it was probably Claude Champagne, her first composition teacher and mentor, who helped the most in establishing her musical style. In 1972, she traveled to Nice to study with Tony Aubin. She has written numerous works for young players but also larger works for piano, violin, cello, orchestra, organ, voice, choir and chamber music. Her achievements were recognized in 2002 when the Association of Canadian Women Composers awarded her with an honorary lifetime membership. She also shared her passion for music as a dedicated teacher. From 1943 to her recent passing on July 31st, 2006, she taught violin, cello, and composition with great energy and all her students will remember her for her unbridled enthusiasm, curiosity, and love for music.

A Unique and Personal Style

Being a female composer at a time when few women practised this profession, Sr. Jacques-René (her religious name) never wanted to adhere strictly to current trends and styles. She once said in an interview, “l asked Mr. Claude Champagne, my teacher at the time, if I could create my own scales which were neither major nor minor. They became my own personal rendering of the twelve-tone scale, dissonant but not as severe as other works composed with this technique. By combining different scales together, new chords are created and stacked to create an atonal style which I used to create my first compositions. Mr. Champagne approved of this method much to the chagrin of Sister Marie Stephane (the School’s Director at the time) who was not used to modern music. I like to create themes which are colorful and dynamic. My music is lively but remains a peaceful experience for all who listen” 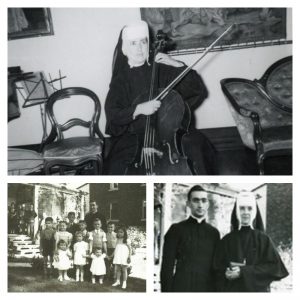 Rhene Jaque composes with children in mind: “My fellow teachers would ask me to create compositions for their students and I found that the best time to do this was during vacations because I needed a lot of time and tranquility.” She was very concerned with creating a pleasing experience for her young players so she substituted the serious side of music for a more whimsical and expressive one, drawing her inspiration from miniature scenes or tableaux. A good example is The Little Grey Donkey. She said: “I imagined a stubborn little donkey moving along steadily and then stopping suddenly in his tracks. His frustrated master tries to get him going again but it is the donkey who finally decides on his own to return to the stable.” The donkey in this scene was inspired from a trinket sold table to table by a poor young boy at a restaurant in Nice.

She is a master at combining contrasting rhythmical passages with more lyrical ones. The pieces Vision spatiale (A Vision of Space) and Pluie de météorites (Meteorite Shower) display this talent and are well-balanced despite their short length. With Jeux (Games), Badinerie (Jesting), and Toccata sur touches blanches (Toccata on White Keys), she imitates children’s games, using quick movement of hands and fingers. Other fine works for piano include Lutin (Mischief), Escapade dans l‘île (Escapade on the Island), Scherzo, Suite n° 2, and Etude et Fantaisie (Study and Fantasy).

With their clarity of style and emotional content, her works may sometimes evoke those of Ravel, Poulenc, Bartok and Prokofiev, but with her personal touch, inspired by contemporary writing techniques. 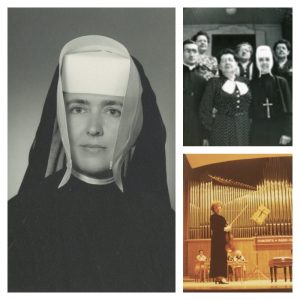 “Many people have wondered where the name – Rhené Jaque – comes from. When my pieces were first being published, Mr. Champagne told me, ‘You must find a good pen name but certainly not a woman’s or a nun’s name, because your pieces will not sell.’ Having very little experience in this domain, I agreed, thinking that he was probably right. One day he told me that he had found my pen name: ‘You will simply invert your nun’s names. (Jacques Rene becomes Rhené Jaque).’ Nobody will ever know that you are a woman or a member of a religious order.”