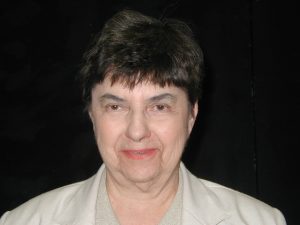 Sister Mariette devoted the first twenty years of her religious life to teaching. She taught at Saint Germain School in Outremont, Outremont Boarding School and the Valleyfield and Saint-Lambert Teacher Training Colleges, where she oversaw the formation of future teachers. One of her former students, who later became her friend, stated, “The intensity of your penetrating  look taught me to push my limits. . . you knew how to direct my wild, bubbling energy to summits of personal involvement. You gave me tools to build my confidence and to satisfy my insatiable need for love.”

At the end of three years of study at the Sorbonne in Paris, Sister Mariette obtained a doctorate in literature, an achievement that did not in any way affect her natural simplicity.

In 1970, her dedication to the life of the Church led her to accept the position of Assistant Secretary to the Quebec Assembly of Bishops. There, she worked with those responsible for the education offices of the Dioceses of Quebec. However, it was a short-lived experience, because she was elected Assistant General Superior of her Congregation in 1971.

For two terms (1971–1981), Sister Mariette would be a valuable resource for two General Superiors: Sister Marthe Lacroix and Sister Hermance Baril. Her insight, dynamism and active leadership helped the Sisters make the necessary changes brought to light by the Second Vatican Council and Quebec’s Quiet Revolution.

Thanks to her capacity to collaborate with others, she formed study groups focusing on the Sisters’ lived experience so that structures and Constitutions took their rightful place as a means of fostering life and could become a source of community and apostolic renewal. The priority given to social justice at that time undoubtedly influenced Sister Mariette’s future. At the age of 55, she “moved from words to deeds” by becoming a missionary in Haiti.

Where did this amazing call come from? Sister Mariette explained it in the following way: “The Little Sisters of St. Therese were running several elementary and secondary schools. They wanted to set up a teacher training college, but they didn’t have the necessary qualifications. So the President of the Canadian Religious Conference (CRC) launched an urgent invitation: Would there, by any chance, be a teaching Congregation that could help these Sisters become more qualified? From the depths of my heart, I heard: Why not me?”

And so there she was in Papaye to collaborate in the founding of the Hinche Teacher Training College. She was named Assistant Director, but in reality she was project manager. Her energetic personality, her pedagogical skills and her creativity opened her to this new apostolic field.

She didn’t escape the challenges of being an “immigrant”: having to adapt to Haitian customs and culture, having to become a French teacher again and, especially, having to find points of reference to make her explanations understandable. In short, her educational mission in Haiti was to help the Sisters become capable of administering their institution and ensuring its sustainability.

Assuming the duties of General Superior

Then, after three years of intensive work, Sister Mariette heard a new call. Home from Haiti as a delegate to the 1986 Chapter, she would emerge from that meeting as General Superior. Even though she could count on her long experience of leadership in the Congregation, Sister Mariette still admitted to feeling unworthy to succeed Mother Marie-Rose. She became aware of her role in promoting unity in the Congregation. She also sensed the need to stay close to the life of the Sisters and to keep abreast of developments in the Church’s thinking.

Looking at all these challenges, she wondered: “Faced with very autonomous canonical provinces, how can we unify the perception of the Congregation’s charism and the way of living our mission? How can I work as part of a team of women who are very committed to the Congregation, but who have an experience of religious life very different from my own? How can I adjust my spiritual life to this new context in my life?”

With the members of her council, Sister Mariette worked on implementing the Acts from the 28th General Chapter. The promotion of justice, from an educational perspective, had been decreed to be the Congregation’s highest priority, regardless of the forms and places of commitment. What means could be used to achieve this primary goal? Hadn’t the pluralism of the 1970s contributed to a sort of diffusion, with Sisters working in a number of different ministries?

In response to this dilemma, several factors fostered the strength and cohesion of our mission: the founding of justice committees to help raise social awareness; reflection on the sense of apostolic community; promoting the participation of lay people associated with our spirituality and charism; and working in partnership with members of our institutions, employees of our residences, and organizations that shared our values.

Sister Mariette also believed that the rising interest surrounding the status of women had to be looked at because “backing away from this issue is no longer possible; the fate of women in the world leaves no woman religious indifferent.” Finally, under her leadership, the Quebec provinces would be unified and the Missions Sector would be created.

Staying “on mission” throughout her life

When her term as General Superior came to an end, Sister Mariette continued her apostolic activity both within and beyond the Congregation. She served as animator for local communities and as a member of the committee for the construction of Maison Jésus-Marie (infirmary); she worked in the office of the Congregation’s Archives, etc.

Always committed to justice, she offered her services as a volunteer with dropouts at Maison du Quartier, and then became a member of the Board of Directors of Carrefour Mousseau in Longueuil.

Living according to her convictions 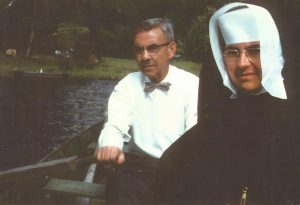 Recalling happy memories, Mariette proudly confided: “I grew up in a home filled with love, music and faith. My father was a music director and my mother sang in the choir.”

Concerning her youth, she added, “Committed to Jesus Christ and his Church, I wanted to save the world! The reference letter that I presented when I entered the SNJM Congregation said: ‘Miss Payment is well known for her good judgment, her work ethic, her success in her studies. She is also endowed with a spirit of initiative and a social sense that makes her sympathetic to those around her. In addition, she has a solid spirituality and convictions that lead her to action for noble causes . . . and with charitable organizations helping the poor.’”

These notes certainly confirm the impact of the life of this bold woman constantly concerned with progress, unity and harmony.

Daughter of Euclide Payment and Diane Laurendeau, Mariette Payment was born in Montreal. She was the third in a family of five girls. Her first years of education were spent in schools administered by the Sisters of the Holy Names of Jesus and Mary (SNJM).  Her parents’ faith life and her involvement in youth movements, such as the Eucharistic Crusade and especially Catholic Action, surely influenced her choice of apostolic religious life in 1949. A woman of strong convictions, she felt that only God could accompany her in her quest for happiness.