Giving meaning to her life 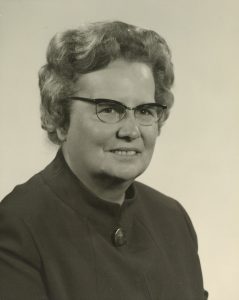 As a young woman, though very conscious of the restrictions she accepted with her vowed consecration, Marthe focused on the spiritual aspect of her vocation. She aspired to a “shared commitment with other women with the same desire to respond to a need for Christian education of youth.” Life with other sisters seemed to her to be a source of inspiration and an opportunity to “share their life of prayer, their values ​​and their apostolic concerns.” She believed that religious life immersed her in the Church’s mission of witnessing to Jesus Christ. After fifty years of consecrated life, she confided: “I realize that the restrictions and limitations that are asssumed can only foster our human and spiritual growth.”

Believing in the need for appropriate formation

Sister Marthe is described as a vigilant, competent and enthusiastic educator. Her nineteen years of teaching boys at Mont-Jésus-Marie, in Outremont, had an impact on the careers of hundreds of professionals. Armed with a teaching certificate, a bachelor’s degree in family education and a bachelor’s degree in hygiene and education, she had the opportunity to continue her studies at Columbia University in New York. By the end of her studies there (in 1965), she had obtained a doctorate in education, in English of course! Upon her return, she assumed the direction of Collège Jésus-Marie in Outremont until it closed in 1969.

Sister Marthe’s competence was now well established. The Congregation would entrust her with another mission. In 1970, she was named to the Gosselin Commission. This research team, under the direction of Mr. Roger Gosselin, specialist in administration, was mandated to conduct an inventory of the human and financial resources of the 12 canonical provinces in Canada, the United States and Africa (Lesotho). The goal was to reassess SNJM works and the SNJM workforce. Through this exercise in transparency, the astute pedagogue would help to highlight the Congregation’s actual situation and prepare, from a distance, the post-Vatican II transformations that would eventually take place.

The 1971–1972 General Chapter would be the occasion to follow up on the Gosselin Report. The rich intellectual, human and spiritual formation of Sister Marthe Lacroix, as well as her remarkable contribution to the advancement of the Congregation, unquestionably destined her for the position of Superior General, a position she would hold from 1971 to 1976. With wisdom, generosity and humility, she displayed her qualities of openness, leadership and administration. During her tenure, profound and challenging circular letters would be sent out regularly to the local communities under the title “Reflection of the Month.” It was her way of stimulating interest, deepening the SNJM spirituality and charism, and opening up to the needs of the time.

Faithful to her convictions, Sister Marthe remained highly committed to an education in the faith that demanded a concrete commitment to the promotion of justice, especially for the poor and women. She would invite her sisters to consider “how to share with the less fortunate in projects and improvements made possible through education.” (July 1973). Later, she would insist:

“The Spirit invites us to seek new forms of ecclesial ministry that will make of our shared responsibility an apostolic reality adapted to our time” (March-April 1976). 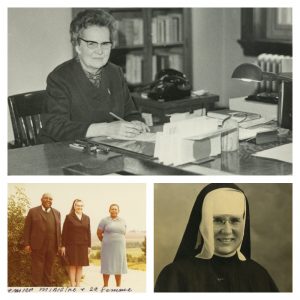 Her thinking was directed towards the promotion of women:

“The effective renewal of religious life for women is intimately linked to the evolution of religious themselves as women … (these latter) have a special contribution to make to the Church and to the world and, consequently, they have the right to assume their responsibilities not only in matters that affect them personally, but in all areas of the Church” (May-June 1976).

Actively committing herself to a cause

Once her term as Superior General was over, another challenge awaited this woman inspired by a great admiration for her Congregation’s foundress, Mother Marie-Rose. From 1976 to 1992, the Congregation entrusted her with directing the Marie-Rose Center, housed at the Motherhouse in Outremont. She would be responsible for Mother Marie-Rose’s cause of beatification. Could she have ever hoped for a more meaningful mission?

She enthusiastically devoted herself to the roles of archivist/researcher, communications and public relations officer, writer and editor, conference speaker, guest on radio and television shows, organizer, etc. She saw to the publication of two new biographies on Mother Marie-Rose. She also had Mother Marie-Rose’s original portrait restored and commissioned a wooden sculpture of her from the artist Yvette Fillion-Hébert. She used the Marie-Rose Bulletin to keep her community and the public informed, thus raising the profile of the foundress as well as fostering people’s love for her.

On July 13, 1979, Pope John Paul II declared Mother Marie-Rose Venerable. That was a great joy for Sister Marthe and enabled her to work with even greater enthusiasm to promote the beatification. An attested miracle would lead to that much hoped-for day, which arrived on May 23, 1982. On that day, joyful anticipation filled the basilica in Rome. Blessed Marie-Rose Durocher was now among the elect. Along with her collaborators, Sister Marthe would again resume her work of publicity, travel, organizing celebrations, renovating the tomb, etc. The SNJM sisters and the people closest to them got caught up in the current of fervour. Sister Marthe Lacroix confided that her involvement in the cause of beatification was for her “the opportunity to live a unique spiritual experience.” 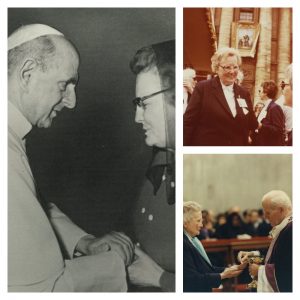 In 1992, when the time came to transfer the Marie-Rose Center to Longueuil, the site of the Congregation’s founding, she would pass the torch on to someone else. Sister Marthe, who had never sought recognition, would now serve her sisters in other ways. When her strength diminished, she would visit sick sisters who were suffering from loneliness or feeling apprehensive about death. Her “unique smile, her attentive presence, her great kindness” would be a source of comfort to them. When she herself was admitted to the infirmary, she strengthened her bonds of intimacy with God. She spoke openly of her death as a great Encounter with the One who had been the “Love of her life.”

Several touching testimonies witness to the depth of the influence of this “endearing and joyous woman with many friends.” “In a great concern for unity, she succeeded in building bridges between Africa and the two Americas.” “She let herself be shaped by life, by events, by God. One felt that she was eager to make progress, to move forward. I have the feeling that this came from the quality of her attentive, warm and listening presence and from her ability to integrate mission, spirituality and humanity.” “She inspired us to work for the advancement of a more just society, in a spirit of interdependence for mission, long before we were even aware of it!”

Marthe Lacroix (1917–1999) was born in Broughton Station, Beauce. She was the fifth of seven children in the family of Édouard Lacroix and Alida Routhier. Her father was a general merchant and a trader in lumber, maple sugar and livestock. “I was witness to a real bartering system at home, in the almost multicultural environment where I grew up,” she said. At the age of 11, she became a boarder at the Disraeli Convent run by the Sisters of the Holy Names of Jesus and Mary (SNJM). This explains her entry into this congregation in 1935.