An educator first and foremost 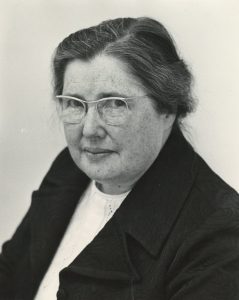 In all her commitments, Sister Gertrude lived her Congregation’s charism: faith education combined with a concern for justice and a spirituality centred on Jesus and Mary. She taught English-language students for about 20 years while pursuing her studies at the Université de Montréal. In 1952, Pope Pius XII encouraged women religious to further their theological formation. Responding to this call, Sister Gertrude attended the new Regina Mundi Pontifical Institute in Rome in 1956 and 1957. While there, she defended her thesis and obtained a Magister in Sacred Sciences. Her experience with religious Sisters from all over the world stimulated her interest in biblical studies.

Sharing her knowledge as a biblical scholar

While working in formation with SNJM junior Sisters from 1957 to 1966, she followed specialized courses in theology and Sacred Scripture while preparing for a Master’s degree. In 1965, she became director of the English sector of the Diocese of Montreal’s Bible Centre. While there, she began writing the leaflet I Discover the Bible, which was greatly appreciated. In 1968, 15 million copies of the French version of that leaflet, Parole-dimanche, would be distributed. Her quality as a writer would earn her the title of “Fantastic Woman” in 1972, an honour awarded to women who had distinguished themselves in various fields.

She generously shared her skills within her Congregation in numerous ways: by facilitating sessions and retreats; by writing the Syllabus on the history of her community; by choosing biblical texts in connection with the revised Constitutions; by participating in program development for SNJM associates, etc. She also offered numerous Bible sessions to other religious Congregations and to adults of various religious affiliations. She was a guest speaker at Marianopolis College, McGill University, the Montreal Seminary, etc. She served on numerous committees in the Diocese of Montreal and other dioceses. Several Protestant churches also called upon her services.

Publication of the conciliar decree on ecumenism (Unitatis Redintegratio) inspired her to draw closer to other religious denominations. She believed that this text, written in a non-confessional vocabulary, could also be addressed to non-Catholics. She noted: “This is the first time that the Catholic Church has recognized that the Holy Spirit can act in a movement outside the Church. It no longer considers itself the centre of unity; it is Christ who is its centre.” As early as 1965, at the Erskine and American United Church in Montreal, she and several other Catholic women religious participated in an ecumenical meeting among representatives of several Christian churches.

According to Sister Gertrude, ecumenism is an interior attitude, an act of a Church that does not seek to convert, but rather to present itself to others with sincerity and integrity. As a true educator, she organized an information meeting for SNJM’s at Pensionnat Saint-Nom-de-Marie. This meeting gave rise to the project ROR (Rencontre oecuménique de religieuses), an ecumenical endeavor gathering women religious from various Congregations interested in praying and working together for Christian unity. These ecumenical meetings played an important role in the preparation of the Christian pavilion at Expo 67 in Montreal.

Many other commitments deserve to be highlighted. Sister Gertrude was a member of the Anglican-Roman Catholic Dialogue, a consultant at the Montreal Ecumenical Centre, a founding member of Canadian Churches and the Canadian Catholic Conference, a delegate to the Triennial Assembly of Churches, a regular participant in Jewish-Christian dialogue, etc. Pope Paul VI would recognize her commitment by awarding her the “Pro Ecclesia Pontifica” medal. For his part, Father Irénée Beaubien, S.J., had this to say about her:

“Sister Gertrude was always ready to collaborate with the Canadian Centre for Ecumenism. I remember her as a woman of deep conviction, teaching the Word of God with as much skill as clarity.”

Promoting the advancement of women in the Church

Long before the role of women was being discussed, Sister Gertrude had already begun preaching retreats to Anglican women and American deaconesses. Being in contact with them, she felt challenged by the question of the diaconate. The Second Vatican Council had restored the male diaconate. Could this type of ministry, present at the Church’s beginnings, become once again accessible to women? Her shared experience with Lutheran deaconesses over a 17-year period, as well as the 1972 International Colloquium, had demonstrated the importance of biblical exegesis for the advancement of women.

In 1983, at the request of the Quebec Assembly of Bishops, Sister Gertrude produced the document La marche vers la restauration du diaconat pour les femmes (The movement towards restoring the diaconate for women). Her study would change nothing in Rome’s decision. However, although faithful to the Magisterium and the mission of the Church, this biblical scholar would nonetheless continue her role as educator and active agent for the advancement of women. She took an interest in the Women’s Ordination Conference held in Detroit in 1975 and would support some American nuns reprimanded by Rome for their avant-garde initiatives.

Witnessing to a great openness of heart and mind

A widely acclaimed woman, Sister Gertrude McLaughlin was a precious beacon for her Congregation and for the cause of church unity. Her ease in establishing connections between generations, churches and cultures stemmed from her human qualities and the depth of her faith in God and the human person. Her own testimony reveals her total availability and great openness of heart and mind:

“When I go to meet others, whether those of my Church or not, I meet them in the integrity of my faith. I don’t dilute what I have to say. I express frankly and openly what I believe, but I also present myself humbly, because it is by the grace of God that I am who I am.” 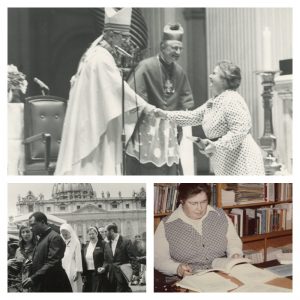 Gertrude McLaughlin (1913–1988) was born in Montreal to Irish parents, Charles McLaughlin and Ann Florence Griffin. She was the eldest in a family of seven children. Even at a very young age, she already demonstrated superior intelligence. She completed her high school at Saint-Nom-de-Marie Boarding School in Outremont. Known as a wellspring of knowledge, she was interested in politics, music, languages, art galleries, etc. Yet she remained very much rooted in the practicalities of life: she could even tell you where you could find the best ice cream parlour in town. Her companions described her as a laughing, sympathetic friend with a simple and solid piety. Faced with her parents’ refusal to give their consent, she had to wait until she was 21 years old before fulfilling her desire for religious life with the Sisters of the Holy Names of Jesus and Mary (SNJM). Perfectly bilingual, she constantly tried to ensure positive relationships between Anglophones and Francophones.