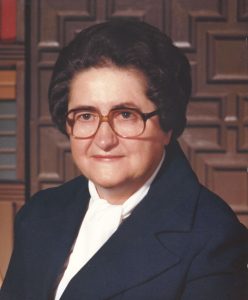 Throughout her commitment as an educator and her service in leadership within the Congregation, Sister Hermance Baril seems to have taken as a motto: Rooted in God, go to the very heart of things.

For some thirty years, Sister Hermance taught at the CÉCM (Commission des écoles catholiques de Montréal) and in our boarding schools in Épiphanie, Hochelaga, Valleyfield, St. Lambert and Longueuil. Obtaining a doctorate in philosophy from the University of Montreal enabled her to teach philosophy at Eulalie-Durocher Normal School (St. Lambert) and at Collège Jésus-Marie in Outremont. It is said that she inspired her students with the quality of her person and the values she upheld.

Many students remained very grateful to her. One of them testified: “I remember her generous heart. She was humble, with a kindness that I will never forget. Her smile, her (singing) voice, everything about her was beautiful.” Father Emmet Johns (Pops), who got to know her well in Pierrefonds, confirmed that assertion: “She truly inspired me and what struck me most about her was her humility and her kindness.”

Participating in the life of her Congregation

The 1970’s marked a major turning point in the evolution of the SNJM Congregation. Because of the great upheaval of life taking place at that time, the Congregation had to adapt its structures, its way of looking at things and its way of doing things. That implied reflection and discernment. In 1971, a participative organization called the “Collège des Provinciales du Québec” (CPQ) took shape. Elected as the organization’s executive secretary, Sister Hermance used her talents as a wise and organized woman.

A year later, she became Provincial Superior of the canonical province of Outremont. With her usual good judgment, she surrounded herself with counselors possessing various skills which would help them in sharing her responsibilities. This way of leading her province gave her time to discern various projects in prayer and time for reading and reflection, which she deemed necessary in order to keep abreast of important questions regarding the life of the Church, consecrated life and the apostolic mission. 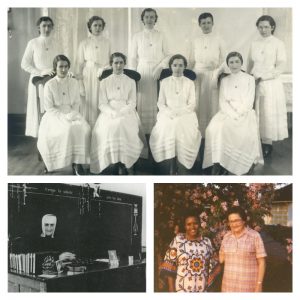 In a letter addressed to the Sisters in her province, Sister Hermance urged them to listen to God’s calls expressed through a variety of circumstances. She could not have suspected what the 1976 General Chapter was about to call her to do: to faithfully carry out the function of Superior General of her Congregation. Her five-year term would be renewed.

Relying on the collaboration of Provincial Superiors, she summoned them to special meetings and saw to the organization of the annual meeting of the General Executive Board (GEB). She also called on different groups of Sisters to reflect on specific themes and proposed various activities, such as a colloquium on justice, a month of renewal, and meetings of directors of formation and vocation. She considered these events, focusing on listening, discussion and dialogue, as a means of working together to build and solidify the Sisters’ bonds as members of the same institute.

For Sister Hermance, adapting the demands of consecrated life within a social setting also implied the responsibility of doing research. She therefore added four consultants to her team of two councillors, and gave them the task of shedding light on various topics.

Concerned as much about the future of the Congregation as its return to its roots, Sister Hermance inspired the community with her monthly letters filled with hope. She invited everyone to reflect upon our charism, our religious consecration, our apostolic mission. She presented our foundress, Mother Marie-Rose, as a woman of faith, charity and hope. She also commissioned the publication of a booklet entitled She Who Believed in Tomorrow.

From the beginning of her first mandate, she was responsible for implementing the orientations of the 1976 General Chapter, which defined education in the faith as a priority. She specified: “It is according to this very specific aspect that we must examine our mission in light of the needs of society and the Church.” In a way, it was a call to become more aware of the problems of society, to detach oneself from traditional teaching and, for a certain number of Sisters, to choose new areas of ministry. This needed to be done with discernment, balance and solidarity, while remembering that “education in the faith requires a concrete commitment to the promotion of justice” and that it encourages “creativity . . . and solidarity with the poor and disadvantaged.” All of this calls for a constant conversion of heart.

Promoting the status of women

Sister Hermance played an important role with respect to the rise of the feminist movement in the 1970’s. She detected a source of tension, and even of division, in the movement. In a spirit of collaboration, the French-speaking Major Superiors established a network of “respondents” who were responsible for raising awareness, among women religious and lay people, about the advancement of women. Well aware of this issue in her own Congregation, Sister Hermance invited Sister Jacqueline Beaudet to be part of this group, with a view to raising awareness and fostering openness and solidarity among women.

Always interested in a balanced approach to things, Sister Hermance wrote in one of her letters, “Between indifference and exaggerated activism, there is a whole range of possible attitudes and actions.” The Acts of the 1986 General Chapter would later echo this vision of openness and equity:

“Faithful to our tradition as educators, and committed to the promotion of justice, we want to work in reciprocity with all women and all men to create a new humanity in which the rights of all are respected.”

To achieve this goal, this same Chapter recommended, among other things, the use of inclusive language; the development of a spirituality specific to women; a concern for dialogue with lay people and ordained ministers in order to define the place of women in the Church and in society. It would also focus on encouraging women to exercise a leadership role and to become involved at the level of decision-making. 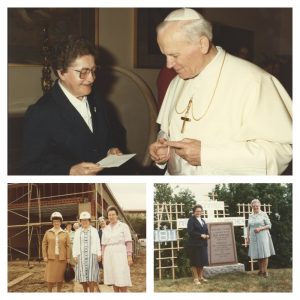 The landmark event of Sister Hermance’s second mandate was no doubt the beatification of Marie-Rose Durocher in Rome, on May 23, 1982. Starting in her first term, she had appointed the ex-Superior General, Sister Marthe Lacroix, as director for the Marie-Rose Center and the beatification process. How happy Sister Hermance must have been to be present in Rome on that impressive day and to hear her foundress proposed by John Paul II as being “a woman of rare balance, a model for our time and a very apostolic figure.”

The revision of our Constitutions, adapting them to the spirit of Vatican Council II, was another important achievement for Sr. Hermance. Begun in 1967, work continued throughout her two terms. Concerned with preserving the initial inspiration, she herself went to Rome to answer questions and to ensure the final approval, which came on        May 23, 1985.

A surge of renewal blowing over the Congregation was reflected onto the whole Church!

Plumbing the roots of her being

The 1986 Chapter demanded all of Sister Hermance’s energies. Following this Chapter, she returned to her local community, who were very happy to welcome her back. Her life became punctuated by more or less prolonged stays at the Outremont infirmary. The progressive deterioration of her sight prematurely deprived her of her ability to read. That hardship was compounded by the illness and death of her sister Yvette, who was also an SNJM Sister. Sr. Hermance entered the infirmary once and for all in August 1994. Her nurses testified, with emotion, to her courage and patience, to the depth of her rootedness in God. In June 1984, she herself had written:

“Going to the roots of my consecration is to relive the initial ‘yes’, which, for me, was a faith experience; it is recognizing and accepting that one day I was seized by Christ and that my response, at the faith level, at the deepest level of the my being, was a total gift of all that that I have and all that I am.”

Sister Hermance Baril, with her quiet strength and her undeniable wisdom, was greatly admired by her Sisters. Her influence is still felt within the Congregation.

Report on the State and the Apostolic Work of the Congregation, 1976–1981

Report on the State of the Congregation and the Administration of the General Council,

Hermance Baril was born January 28, 1915, in Saint-Tite, Quebec. She was the daughter of Arthur Baril and Louise Thiffaut. She attended primary school in her native village and continued her studies at Mont-Royal Boarding School in Montreal, with the Sisters of the Holy Names of Jesus and Mary (SNJM). Having already acquired her teaching diploma, she joined this Congregation in 1936.

After a 33-year teaching career, she assumed positions of leadership in her Congregation for some fifteen years — a leadership of genuine influence.