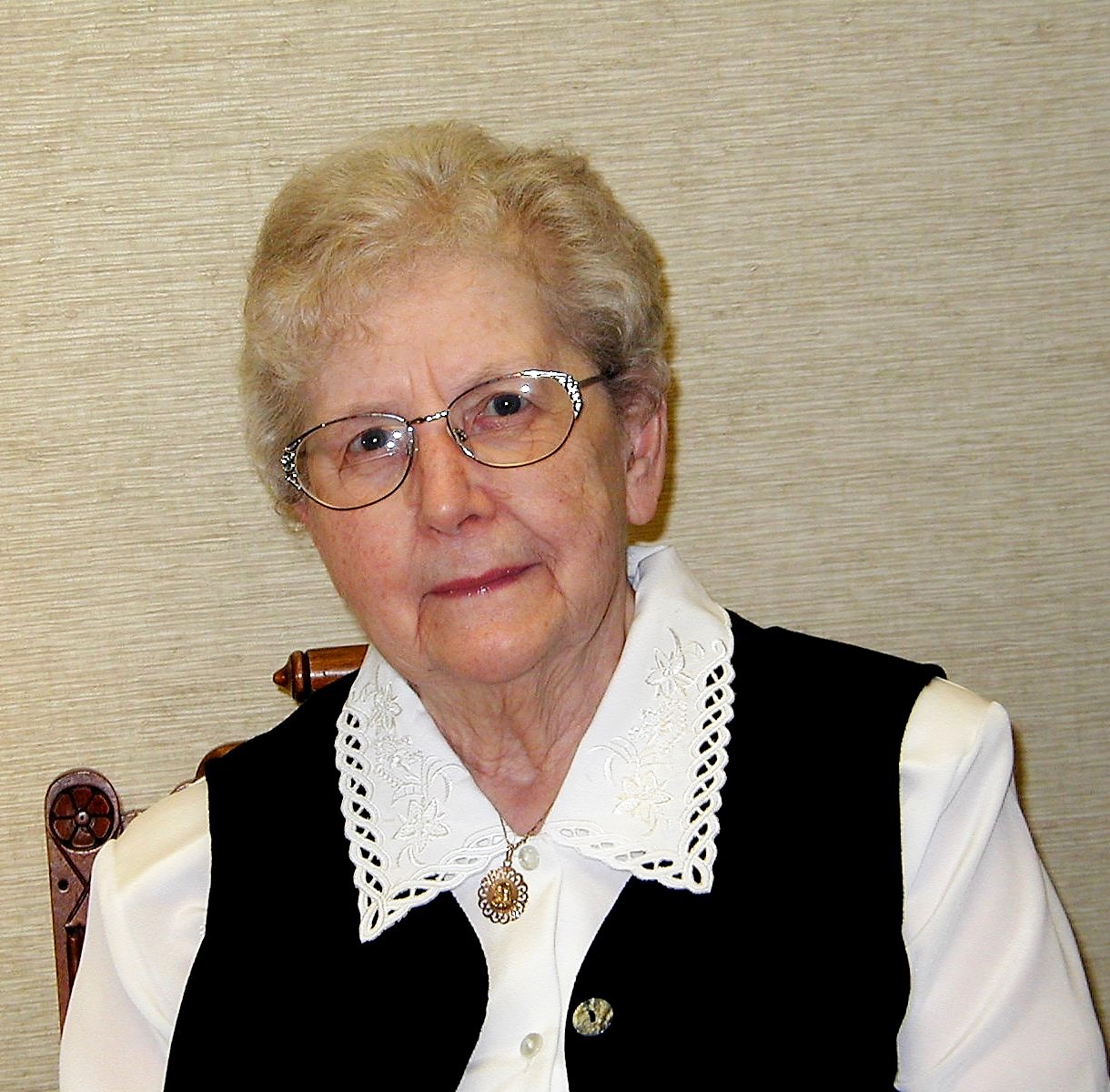 July 21, 2019, Sister Thérèse Lemay,
in religion Marie-Jean-Arthur, went home to God.
She was 102 years old, and had been professed for 75 years.
Born in Valleyfield, Quebec, she was the 6th of 8 children
of Arthur Lemay and Ovéline Lapierre.

Thérèse grew up in a fundamentally Christian environment with daily Mass, evening prayer, family rosary and a welcoming family table at which priests from the parish and the seminary were often present. Thérèse had a happy childhood; she loved taking care of others. “I would gather underprivileged children from my neighbourhood and spend my vacation time entertaining them. On rainy days, I would bring my little friends home with me, and Mom’s patience with us was admirable”

After having attended Bellerive Parochial School, directed by the Sisters of the Holy Names of Jesus and Mary, Thérèse became a boarder at École Normale-de- Valleyfield. She then taught for 2 years with the SNJM Sisters.

The question of Thérèse’s vocation preyed on her mind: “At a very young age I felt drawn to religious life, but I was torn by the choices of communities. I liked the SNJM’s; I liked the Clarisses de Bellerive, whom I often went to see. Where would I go?” Following a retreat for discernment, she entered the Dominicans in Berthier, a contemplative community. But, for her, the apostolate with young people was missing. And so it was, that on October 26, 1941, she went directly from the monastery to the SNJM Motherhouse, from one novitiate to the other. At the time of her religious profession, Sister Marie-Jean-Arthur was 27 years old.

The newly professed returned to teaching at Cherrier and Delorimier school; and then at St-Timothée. 5 years later, issues with her throat necessitated a change in mission. She was named Directress of Discipline, in charge of students from ages 6 to16, who were boarders at St-Chrysostome, St-Louis-de-Gonzague, and St-Roch-de-l’Achigan. Eleven years later, Sister Jean-Arthur returned to teaching, and was named Superior and Directress at St-Bruno: a six year experience.

Sister Thérèse was then ready to head in a new direction, which deeply resonated within her. Mandated by the Bishop of St-Jean-Longueuil, she became a parish pastoral agent, which was a post-conciliar innovation, first at St-Bruno and then in charge of St-Josaphat and St-Jude Parishes. “These 14 years of pastoral work were the most wonderful of my entire life. I thank God for them.” (a note written by Sister Thérèse when she was 92 years old) It was during these years that Sister Thérèse, delegated by the parish, brought six 18-year-olds to Cameroon in Minta, a small bush village twinned with St-Bruno, to assess work that had been done.

While providing services to the community as local superior and assistant to the provincial superior, Sister Thérèse continued her commitment in the parish: catechist, warden, and providing pastoral care of the sick. Her last 20 years were lived out at Ste-Émélie Residence, and then at Maison Jésus-Marie. A joy-filled woman, Sister Thérèse brought with her the quality of her affable presence, her team spirit and the depth of her contemplative way of life.

We are called to give thanks for the fruitfulness of Sister Thérèse’s long life.