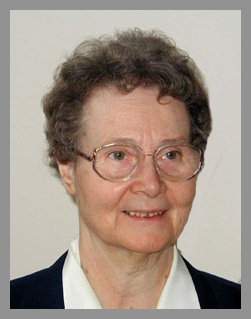 “Be dressed for action and have your lamps lit.
Blessed are those servants whom the master finds alert when he comes.” (Luke 12: 35-37)

She was 84 years old and had been professed for 65 years.
Born in New-Glasgow, Quebec, she was the 15th of 16 children
of François-Xavier Latour and Florida Brière.

Rollande grew up in a happy and hard-working family on her parents’ farm: we recited family prayer, the rosary, and prayers to Saint Joseph. In the evenings, the neighbors would come over for card games, dances, and songs which brought joy to everyone. Rollande obtained her Grade 7 diploma at the local school. She was 12 years old when her father died, so she would have had to leave school. A Sister of the Holy Names of Jesus and Mary, who happened to be in her village, offered to take her to Hochelaga Convent Boarding School where, as a Oiseau bleu (Blue Bird), she could help out with small chores and receive a basic education. Rollande lived there for a year.

When she returned home, she helped her sisters-in-law from time to time, and sometimes worked in a canning plant to earn some money. Secretly, she was contemplating religious life, and although she did not like to study, she enjoyed manual labor. When she was 15, she was being courted by a serious young man. “She told him straight out that one day she would become a religious, and stated this same fact to an SNJM Sister, who helped her to take the necessary steps.”

She was 16 years old when she entered the novitiate. She wanted to save souls by offering up her work and her prayer. Accustomed to a large family, community life seemed easy for her. After her years of formation, she began her religious life as a “refectorian” and cook at Mont-Royal Convent and  Sainte-Émélie Convent Boarding Schools.

Following that, she was assigned “permanently” as a nurses’ aid caring for the sick Sisters at the Motherhouse. For 46 years, she dedicated herself, day or night, with attentiveness, mainly on the 1st floor infirmary. With a prayerful and compassionate presence, she accompanied the Sisters who were dying. She had a three-year mandate as coordinator of the sick, on 4 East. Her presence as an animator was attentive and efficacious through her genuine compassion, love and kindness for each one.

“Sister Rollande counted neither her time, nor her discomfort, nor her fatigue; she listened only to her immense heart. By her warm welcome, her attentive listening, and her kind attention, she knew how to heal both physical and emotional hurts.  She was a gracious, loving and a friendly companion, with whom it was a pleasure to live. She worked quietly, giving the best of herself to the end of her strength.”

When the Motherhouse closed, Sister Rollande moved to Cartierville Residence where she lived for 5 years; followed by another 5 years at Ste-Émélie Residence. She provided community services: receptionist, replacement for nurses as needed, and ministry of prayer. In 2015, she was welcomed into Maison Jésus-Marie, now dedicating her time mainly to the Lord’s presence. Sister Rollande has now met Him whom she had served so well in others.