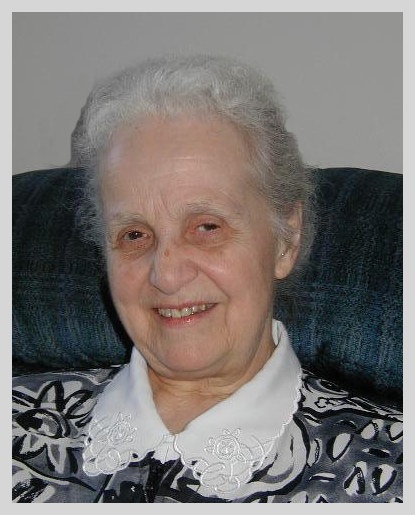 “His power working in us can do infinitely more than we can ask or imagine” Eph. 3:20

She was 93 years old and had been professed for 74 years.
Born in Valleyfield, she was the eldest of six children
of Antonio Philie and Germaine Montpetit

Madeleine was born on Holy Thursday and was baptized the following day.  She was a happy child who grew up in an open, welcoming and faith-filled home. Upon completing her studies at the Valleyfield Boarding School at the age of 17, Madeleine entered the novitiate of the Sisters of the Holy Names of Jesus and Mary, whom she knew well because three of her aunts had already preceded her.

Speaking about her novitiate, Madeleine confided, “The most difficult years of my life! Except for the singing of the Liturgy of the Hours, I experienced only boredom, disgust and painful coldness of mind and heart.”

At the taking of the habit, she received the name Claire-de-l’Enfant-Jésus, Claire being the name of her youngest sister. Five years after her temporary profession, a week before making her final profession, her father suddenly died at the age of 46, leaving behind his wife, four school-aged children and a nine-month old baby,  “I was not upset when urged to return home.  With profound happiness and in deep faith, I pronounced my “Yes” to God.”

During the first 16 years of her religious life, Sister Madeleine taught children at the primary level or was the directress of discipline in our Ste-Émélie, Marie-Rose and Outremont boarding schools. Then she was appointed to the general secretariat as head of the “Little Chronicle” at the Motherhouse.  For 10 years, she enjoyed writing the obituaries of our French-speaking sisters. Following some time working at the Longueuil secretariat, she served as local superior at the Longueuil convent.

Sister Madeleine had a secret desire to live in a house of prayer. She was 57 years old when her dream gradually took shape, first she went to Marie-Rose then to Beloeil, Pie IX, and finally to St-François-d’Assise. The latter was a house of prayer where the breviary was prayed several times a day and where longer times were devoted to silent prayer. Sister Madeleine was the local leader among several Sisters who shared in the project. They welcomed people who wanted to make a retreat or have days of silent solitude with the Lord. Sister Madeleine did spiritual accompaniment and was also involved at the parish level. “My eighteen-years at St-François-d’Assise was like an apex of happiness in the happy course of my long religious life.”

Welcomed at Marie-Rose Center in Longueuil and being responsible for the mail, Sister Madeleine marveled at the faith of people, in the power of intercessory prayer to God, and the great devotion to Blessed Marie-Rose Durocher.  As she was aging, she was experiencing detachment and eventually moved to the infirmary at Maison Jesus-Marie where she continued smiling and praying.

Sister Madeleine, who had the gift of attentive listening, calmness, resourcefulness and a warm personality, was surely received with love by the God whom she served with joy.