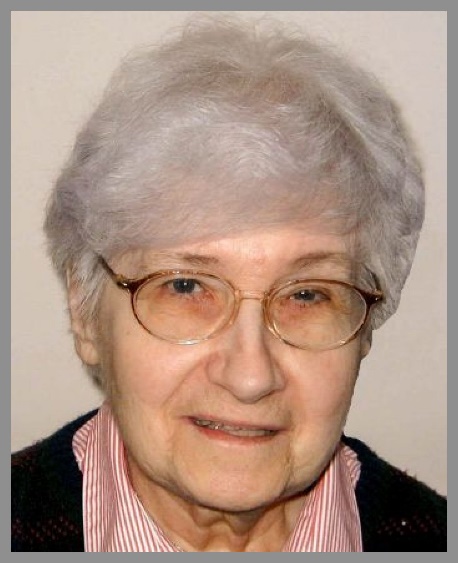 She was 93 years old and had been professed for 72 years.
Born in Montreal, Quebec, she was the 3rd of the 3 children
of Ernest Rolland and Yvonne Racine.

Louise grew up in Montreal, in Paroisse St-Pierre-Claver. She first attended her parochial school and then École Saints-Anges in the neighboring parish, two schools directed by the Sisters of the Holy Names of Jesus and Mary. Her mother died after Louise, who was 13 years old, had completed her elementary school studies.  Pursuing her studies, she attended Hochelaga Convent as a boarder where, after 5 years, she obtained a commercial diploma from that institute. For 2 years, Louise had felt called to religious life with the SNJMs, and at the age of 19, was accepted into the novitiate.

Upon receiving the habit, she was given the name Sister Marie-Madeleine-Yvonne. Her first assignment, teaching children in grades 4, 5 and 6 lasted for 30 years. She left her mark mainly in Longueuil at École Ste-Rose, at Pensionnat de Longueuil and in Beauharnois, at Écoles Notre-Dame and Saint-Paul. She led the Mouvement de la Croisade Eucharistique (Children’s Eucharistic Crusade) with the students from school, “developing in the children the sense of responsibility and commitment”.  She was also serving as sacristan in the convent, at that time.

In 1976, Sister Louise had to leave teaching; she was needed in the finance department at the Mother-house and later at the SNJM Quebec Province level. At that time, she was living at the Motherhouse, as a member of the “Ma Maison” group. For 30 years, with faithfulness, courtesy and kindness, Sister Louise carried out the services associated with her work. With a smile and with calmness, “she knew how to put people at ease and how to solve seemingly insoluble problems”.

When the Motherhouse closed, Sister Louise spent a year with a community group at Résidence Cartierville, before being welcomed into Maison Jésus-Marie. It was time for community services adapted to her physical limitations and, more and more, to a ministry of prayer. With serenity, she welcomed a last visit from the Lord to whom she had devoted her life.

“Sister Louise was always committed with generosity, according to her abilities.”