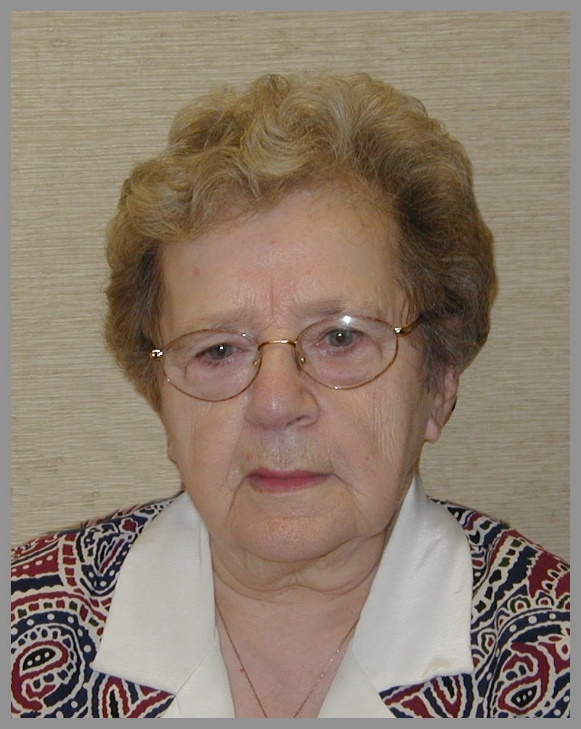 She was 94 years old and had been professed for 62 years.

Born in St-Roch-de-l’Achigan, Quebec, she was the 9th of the 14 children

Of the eight children born before Gilberte, there were only five left at the time of her birth, the other three having died in early childhood. Gilberte was only seven years old when her 49-year-old father died. She continued her education until she was 17 years old at the Convent in l’Épiphanie, with the Sisters of the Holy Names of Jesus and Mary. She then dedicated herself to teaching, and subsequently worked in accounting at the Caisse Populaire. When she was 29, she requested to enter the SNJM Congregation.

As a novice on mission, Sister Élie-du-Carmel was named to Côteau-Station to teach Grades 8 and 9.  Following her religious profession, she taught Grade 6 for three years, in Valleyfield. She then returned to the Motherhouse for three more years of formation: juniorate and scholasticate. Upon returning to the classroom, she taught Grade 8 and 9 students as well as children with learning difficulties in Grade 6, in Longueuil, Maskinongé, Beauharnois, St-Chrysostome and Montreal. She later taught French and visual arts to primary level students in schools in the Montreal Catholic School Commission.

“Sister Gilberte taught for twenty-seven years, from pre-kindergarten to high school, including visual arts. She gave herself, body and soul, to teaching and to the education of youth with dedication, a spirit of initiative and creativity.”

When she was 60, Sister Gilberte undertook a new service as assistant at the Provincial Secretariat, a service to which she dedicated herself for 10 years. Before being appointed to Ste-Émélie Residence, she lived with a community group at Rouen Residence for 19 years. For nearly 20 years, she helped the local superior and provided community services.

“Sister Gilberte’s French was impeccable; often she edited texts, including that of a doctoral thesis.”

“Adept with her hands, Sister Gilberte rendered multiple services. How many dishcloths did she make?”

“She witnessed to a hardworking and committed lifestyle.”

Sadly, when she was 90, Sister Gilberte agreed to go to the Infirmary at Maison Jésus-Marie. Her turn to receive care had come! Still valiant, she would have loved to once again be of service.

May the Lord be blessed for the Sister Gilberte’s life which was tinged with a much-appreciated sense of humor!