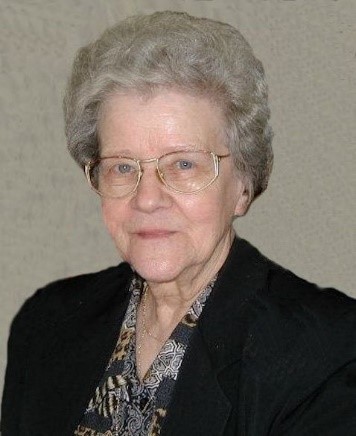 September 27, 2019, Sister Georgette Larose,
in religion Marie-Adrien,
went home to God.
She was 100 years old and had been professed for 75 years old.
Born in Verchères, Quebec, she was the 6th of the 11 children
of Adrien Larose and Émilia Lussier.

Georgette was born on November 11, 1918, just as the bells were ringing for Armistice Day!  She grew up in the center of the village of Verchères, not far from the Church and the convent. Her father managed the General Store in the village. The family was united, and prayer and work were part of their daily routine. Like her sisters, Georgette attended the convent administered by the Sisters of the Holy Names of Jesus and Mary.

It was there that, at the age of 17, she completed her Complementary Courses along with her Grade 6 Piano courses. Working as a secretary for 6 years, she contributed financially to the family store all the while maintaining ,within her heart, the call to religious life, which she had first heard when she was 13 years old.

She shared the following: “When our Sisters were first sent to Basutoland (1931, Lesotho in South Africa) we students at the convent, went out to see their boat passing the pier in Verchères. We greeted them and the captain returned the greeting by sounding the siren: For me, that was the first call to religious life, and the second came one day after Communion”.

When she was 23 years old, Georgette entered the SNJM Novitiate in Outremont. Her first appointments led to the teaching of music at St-Maxime, Côteau-Station, the southern part of Montreal, St-Sauveur-des-Monts: a total of seventeen years which went by very quickly. Sister Marie-Adrien (Georgette was named after her father) was then sent to the secretariat and the printing department at the Vincent-d’Indy School of Music.  She also assumed the care and operation of the institution’s 100 pianos for 17 more years. She was certainly in her element.

After spending 5 years as co-director at Chalet Jésus-Marie in St-Sauveur-des-Monts, Sister Marie-Adrien would serve for 22 years at the Motherhouse. At first she was put in charge of overseeing needed maintenance and other work, and subsequently worked in human resources and in accounting at the payroll department. In 2005, when the Motherhouse closed, Sister Marie-Adrien went to Maison Jésus-Marie where she again worked in the payroll department, before being welcomed into the Infirmary.

When Sister Georgette summarized her life, she stated: “I was always happy, on each of my missions. I always liked to make my companions comfortable: How many Sisters I helped out in my life! How many services rendered. In short, I was, as they say: a “Jack of all trades”. And in confirmation of this, it was said of her: “She hurried to those who required her services, and did so with creativity and resourcefulness.” A small detail: “Sister Georgette saved a lot of paper so that the back of the sheets could be used. She would cut them into notepaper size and thus keep the different departments of the house supplied.”

May the Lord be praised for Sister Georgette’s one hundred years of active service and prayer!