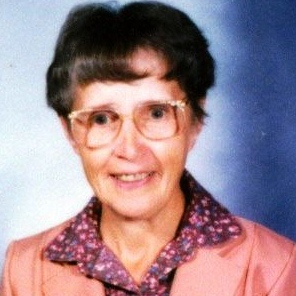 On the 5th of May 2020, Sister Françoise Bergeron,

She was 96 years of age, with 75 years of religious profession.

Born in the southern part of Montreal, Quebec,

she was the 6th of the 9 children

of Eugène Bergeron and Augustine Favreau.

Françoise went to St-Nom-de-Jésus School and then to Marie-Reine School in Montréal, both of which were directed by the Sisters of the Holy Names of Jesus and Mary. After finishing grade 11, she added an extra year of high school to obtain a commercial certificate.  At 19 years of age she entered the SNJM novitiate.

For 25 years, Sister M.-Thérèse-de-la-Passion dedicated herself to teaching, from grade 1 of elementary school to grade 11 of high school. She lived 10 years at the Valleyfield Boarding School, her first mission, and more than one student teacher remembers the lessons learnt in her classroom. In the 60’s after Outremont, Viauville and Longueuil, she found herself in St.Mathieu School in Beloeil, “the only woman in a totally male environment!“

Her functions then started to diversify. After four years as superior in Repentigny and Scotstown, she returned to teaching in Repentigny, while continuing pastoral work in the parish. As a member of the pastoral council, Sister Françoise was very conscientious in responding to the needs of the Church with the spirit of Vatican II: “to renew the Church in which all the faithful, lay, religious and clerics, take an active part“. Her observation of the spiritual needs of the milieu moved her to be part of the baptism preparation team. She also was responsible for the P.A.S (Prayer, Art and Service) project for one year.

Following a term as provincial secretary, she offered the same service to the general administration for 23 years. “Unequaled as a secretary, she became an expert in computer technology. She nevertheless found the time to be involved with the diocesan Renew program as the animator of one of the faith-sharing groups.”

“In her daily life, Sister Françoise expressed herself through art: she had beautiful handwriting and decorating skills, as well as a green thumb, even bringing plants back to life!” “She loved dance, books and hockey with a passion. As a walker, she would have won any marathon… rain or shine, in the cold, very early in the morning, at noon and at night…. Nothing deterred her, not even her fragile bones that broke or wore down…she always got back up!” The Bible was Sister Françoise’s bedside reading: “I discovered a gold mine, an inexhaustible source of life in the Word of God.”

Sister Françoise was well appreciated: welcoming, discreet, meticulous and responsible.  At 77 years of age, she became a member of the community responsible for the administration of Val-Morin Residence. In charge of correspondence and accounting, she helped with the maintenance and hospitality at this oasis of rest and retreat for 11 years. In 2012, Sister Françoise was welcomed at  Maison Jésus-Marie in Longueuil. It was her turn to receive good care.  Lucid until the very end, Sister Françoise, despite her suffering, radiated openness to others and to her God, to Whom she returned her all.