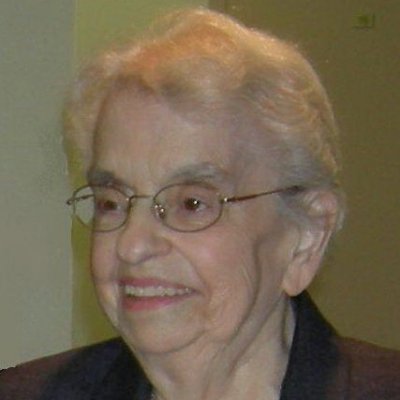 She was 94 years of age, with 68 years of religious profession.

Born in Valleyfield, Québec, she was the youngest of the 16 children

Élisabeth’s paternal grandmother, Josette St-Thomas (also known as St-Arnauld), was a Huron Amerindian. Her parents came from Ontario where their first 13 children were born.  They settled in Valleyfield before the great depression, attracted by the possibility of finding work at the Montreal Cotton Company. Her father and brothers experienced various workers’ strikes there. The family moved often but most of the time Élisabeth grew up near Saint Cécile Cathedral where she went to Mass every morning.  She attended the parish school, then the boarding school run by the Sisters of the Holy Names of Jesus and Mary, where she finished her high school.

She then attended the teachers’ college, where she completed her first year in English. In her spare time, Élisabeth was a member of the “Bernadettes”, kept the neighbourhood children entertained, gave courses and committed herself to the Young Catholic Students Association.  After receiving her superior diploma in French at 19 years of age, she taught for five years before entering the SNJM novitiate. Her commitment to her religious vocation deepened with the years, nourished by a deep concern for the poor and disadvantaged.

Élisabeth received the name Sister Paul-de-Damas, in honour of Cardinal Paul-Émile Leger, who had been her pastor and spiritual director. For six years, she taught at Marie-Rose and Outremont Boarding Schools and Collège Jésus-Marie. Following that, she studied for seven years at the University of Montreal, where she won first place in the exams of the Faculties of Pharmacology for the province of Quebec.

Responding to the needs of the Congregation and in line with her professional formation, Élisabeth became the pharmacist at the Motherhouse. For the next 39 years, she served her community with competence, precision, and steadfast care. When the Motherhouse closed, Sister Élisabeth joined the community at Sainte-Martine, and then that of Marie-Rose-Durocher. Each time, she was commissioned and served faithfully as the local pharmacist.

Throughout the years, Sister Élisabeth was involved with the Justice and Peace Network and the Quebec SNJM Solidarity-Justice Committee. She also served as provincial councillor for several years and as a member of a local leadership team. She was well appreciated as animator of the Place de l’Aurore group. She always remained close to her family and often spoke warmly of them.

A dutiful person since her childhood, Élisabeth was faithful to her commitments and responsibilities. During her four years at the infirmary, she offered others her peaceful and attentive presence. She loved to converse with others and she loved to pray. She also loved to read as often as possible and was always interested in global news, for which she held to her opinions. Freely and peacefully, she welcomed her last moments and handed herself over to Jesus, her great healer and guide.