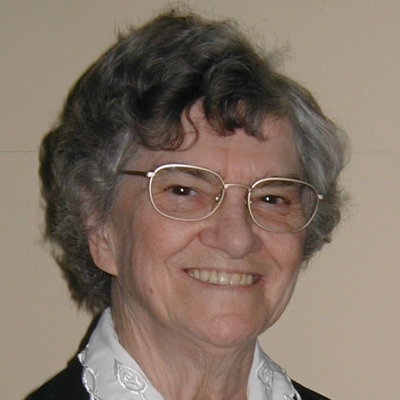 She was 103 years of age, with 85 years of religious profession.

Born in Ormstown, Québec, she was the 9th of the 15 children

The family in which Sr. Corona grew up was described as follows: “Love reigned in the home of Alfred and Albina, as did prayer, faith in divine providence, hard work, creativity and a spirit of sacrifice.” Her father was a farmer and contractor and her mother was a hard-working and courageous homemaker. Corona attended the local school until grade 7. She grew up with the idea of consecrating herself to the Lord.  The only Sisters she knew were her teachers, the Sisters of the Holy Names of Jesus and Mary. Although she was not attracted to teaching, “she wanted to work for and with the Sisters.” “When my sister Claudia decided to enter the SNJM novitiate, she took me aside and said, ‘If you are interested…’ It was all I needed: we entered together on October 22, 1933.  I was fifteen years old.”

When she received the holy habit, Corona was given her mother’s name, Sister Albina-Marie. Her first nomination, and all those that followed for the next fifty years, was to be a cook and what a great chef she was!  At Hochelaga, Saint-Timothée, Saint Lambert Teachers’ College, Sainte-Marthe, Valleyfield, and Sainte-Martine, her reputation preceded, accompanied and followed her!

“Always busy and described as unable to stop, Sr. Corona was a trouble-shooter with great foresight, yet very capable of adjusting to the unpredictable. She was a ‘cordon bleu’ who was always available.”

After years of ministry as a cook, Sr. Corona was named responsible for employees. She also spent time doing handicrafts and helping with maintenance. Since she was creative and skilled with her hands, she devoted herself to knitting, crochet and embroidery, “making tablecloths, bedspreads, quilts . . . as well as cards decorated with flowers, plants and fabric, each one a delicate and beautiful work of art.  What patience, what commitment, what endurance! Corona never stopped.  She had always been an excellent cook and often helped out as a substitute.”

At the Motherhouse, Sister Corona was a salesperson at the community store (“procure”) and rendered various services that were much appreciated. During her last ten years, she lived in the Maison Jésus-Marie infirmary where she loved doing jigsaw puzzles and reading.  As always, she was a good companion, faithful to her family and friends, courageous, and pleasant, with an endearing smile and a twinkle in her eye. As time passed, she remained totally given to the One who had called her and humbly dedicated to prayer. One of her favorite Marian prayers was: “O Virgin of my heart, I am here before you.”  At 103 years of age, she peacefully handed herself over to her Beloved.