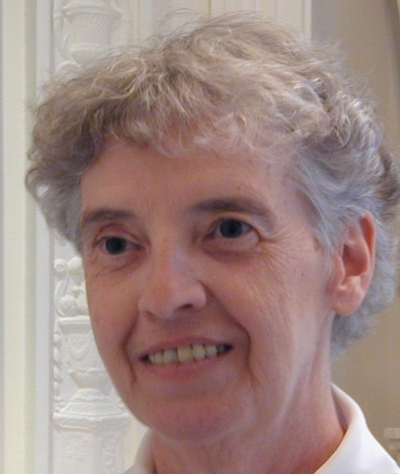 “We were created for you, O Lord, and our hearts are restless until they rest in you.”

She was 85 years old, with 64 years of religious profession.

Born in Montreal, Quebec, she was the fourth

of six children born to Roger Giguère and Alberta Blais.

Aline got to know the Sisters of the Holy Names of Jesus and Mary at a young age since she attended Saints-Anges School in Montréal until grade 9 and then went to Valleyfield Teachers’ College, both of which were directed by SNJM Sisters. After receiving her diploma in education, she entered the SNJM novitiate in July of 1955, at the age of 19.

Named after her oldest sister, Sr. M.-Irène-de-la-Trinité began her teaching career as a grade 5 primary school teacher in Saint-Anselme School. After her juniorate, she was missioned to St. Sauveur to teach Catechism and French in grade 8, then grades 10, 11, and 12 in Charlemagne at Le Gardeur Comprehensive High School, then at Jeanne-Mance Comprehensive High School in Montreal. Aline also organized pastoral activities and was in charge of the following activities: folklore, physical education, the Young Naturalist Club, and Young Catholic Students. Added to all of this, she studied part-time to obtain several bachelor’s degrees: a B.A., as well as bachelor’s degrees in Pedagogy and in Administration. All these experiences led to her becoming the Director of Outremont Convent, then Director of Mont-Jesus-Marie in the Motherhouse, then Assistant Director at St. Lambert High School, then back to being Director at Mont-Jésus-Marie.

At work, Sister Aline was direct, a good listener, intelligent, and endowed with practical common sense when faced with difficult situations. Her refined taste and her joy in planning parties added a very personal note to her leadership.  However, constant worries about her health gradually diminished Aline’s effectiveness and made interpersonal relationships more difficult.

In her retirement years, Sister Aline remained very close to her family. She also volunteered as an administrative resource person for SNJM private institutions and as a member of several corporations. After a two-year sabbatical, she devoted herself to the service of families, faithfully volunteered with the elderly at Carrefour Victoria, and helped with liturgy and faith-sharing on the Word of God.

In 2014, Aline was welcomed into Maison Jésus-Marie. Although it was difficult for her to adjust to the protocols of community life there, she was solicitous for the rights of individuals and easily expressed her gratitude. Until the very end, she made her own decisions, such as refusing certain medical procedures. She died conscious that she was going home to her God who no doubt welcomed her into his eternal joy.