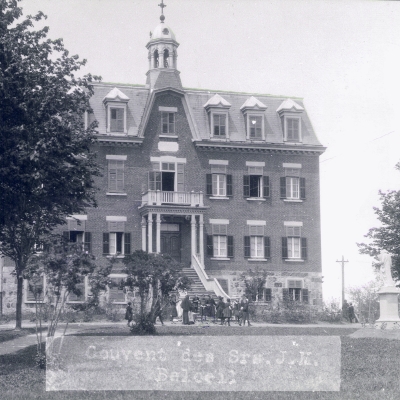 It was in Beloeil that the Congregation of the Sisters of the Holy Names of Jesus and Mary (SNJM) made its first expansion on November 3, 1846. The project was born in response to a clearly expressed demand by the population of the region.

In the Chronicles, it is underlined that the idea was born following the departure of Miss Eulalie Durocher and her companion Mélodie Dufresne to Longueuil to found a new congregation in 1843. “Several notables, distressed by this departure, as well as that of Miss Mélodie Dufresne, who wished to be part of the new community, offered to build a house in Beloeil, where they could devote themselves to God and to the education of youth…”

The founding of a new mission so soon after the birth of the SNJM congregation is unusual, as evidenced by another passage read in the Chronicles which quotes Bishop Prince, Coadjutor of Bishop Bourget, of the Bishopric of Montreal, on November 3, 1846 “Seeing the new Community of Jesus and Mary grow so rapidly from the beginning, I rejoice… I was looking forward to the time very soon when I would be able to see it spread throughout the diocese and bring the benefits of education to the good little girls of our countryside…”.

The first three nuns chosen as missionaries for the opening of this second convent are: Sr. Thérèse-de-Jésus, Superior, Sr. Marie-Ursule and Sr. Marie-Anna. They arrived on November 3 accompanied by the Reverend Father Eugène-Bruno Guigues, Provincial of the Oblate Fathers and Ecclesiastical Superior of the SNJM Congregation, by the parish priest of Longueuil, Mr. M. Brassard, and by the Reverend Father J.M.F. Allard, Chaplain and Director in Longueuil.

On November 9, the first missionaries thought of opening the doors of the boarding school immediately. The same day, seven boarders and 23 day students entered the school!

Despite a fire that destroyed the convent in 1884, the SNJM mission continued on another site where a new convent was built. When the Beloeil convent closed in 1969, several SNJM sisters continued their commitment in the region to ensure a presence for many years afterwards.