40th Anniversary of the Beatification of Mother Marie-Rose 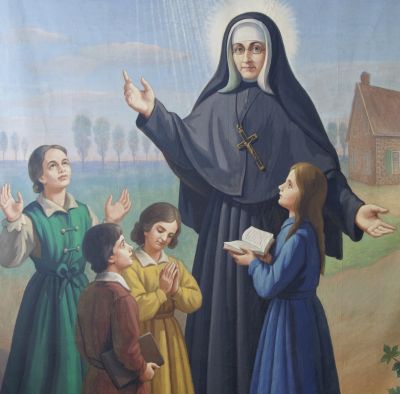 Forty years ago, Sister Hermance Baril, General Superior of the Congregation of the Sisters of the Holy Names of Jesus and Mary, described Mother Marie-Rose’s beatification as:

“In 1982, Pope John Paul II proposed our foundress as a model for our time and proclaimed the relevance of her mission in the contemporary Church.”

A moment of renewal

“The Church recognized Mother Marie-Rose as a beloved woman of God whose ardent desire was to enkindle God’s love throughout the world.”

A moment of hope

“Mother Marie-Rose believed in the future. She knew how to risk living everyday life in solidarity with the women and men of her time. She was able to discern their needs and offer appropriate responses for the future.”

On May 23, 2022, the entire congregation of the Sisters of the Holy Names of Jesus and Mary (SNJM) will celebrate the 40th anniversary of the beatification of Mother Marie-Rose Durocher, founder of the congregation.

On this day, May 23, 1982, the Church proposed her to the world as a model of faith and discernment; a committed and active agent of transformation in her milieu; and an educator concerned with the spiritual, intellectual, and human development of youth.

Traces that attest to her life and influence are still visible and we hope to preserve them for the future. The presence of her tomb in the Cocathedral is a testimony to the values that we wish to perpetuate in the very places where her work began.

Several activities will be organized in all SNJM provinces to mark this anniversary. Already, we can underline the holding of a short pilgrimage on Saturday, May 21 to the sacred site of the foundation of the congregation in Longueuil. This will be followed by a mass at the co-cathedral at 4:30 pm.

A virtual meeting, offered by the Congregational Leadership Team, on Sunday, May 22 will bring together sisters and SNJM affiliates from around the world. Other activities will be held on May 23, the official day of the beatification.

look at the plight of our world during this time of pandemic.

Intercede to God for us so that God may

Be present to those who suffer,

and inspire us to offer comfort and friendship to all.