Going on Mission to Brazil at the Age of 78 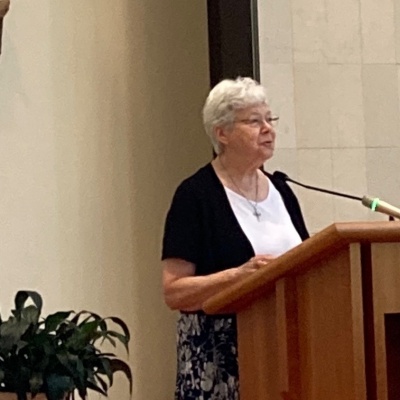 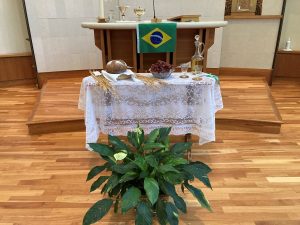 Father Fontaine, the celebrant, invited Sr. Françoise, to give a reflection and testimony during the homily. Following this, a missioning ritual took place during which three prayer intentions focusing on Françoise’s response to the needs in Brazil were prayed.  These prayers replaced the traditional “I Believe in God”. The most exciting moment for Sr. Françoise was undoubtedly when she was blessed by the entire assembly. “When the Sisters raised their hands, it was very moving for me. I am not leaving alone for this mission, I feel supported by my whole family,” she recalls with emotion.” 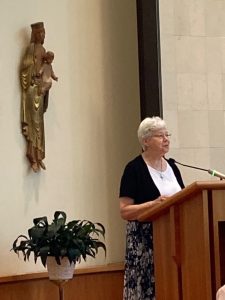 During her testimony, Sr. Françoise briefly recalled her journey, beginning with her YES to consecrate herself to the Lord as a religious, experienced as “the total gift of my life. I placed my life in God’s hands, open and available to his Word and his Love in order to witness to his loving and benevolent presence in the midst of my sisters and brothers where I would be called to live the mission entrusted to me.

This mission first took shape during her teaching years (28) before becoming responsible for the boarders at Collège Durocher. Then, responding to the call of Claude Hamelin, then pastoral animator at the college, she dedicated herself to pastoral work. While completing a certificate in Biblical Studies, she felt a call to the poor. “As I listened to the professor’s commentary on the passage in Luke’s Gospel where Jesus goes to the synagogue and reads a passage from the book of Isaiah, I was shaken… I felt an overwhelming call to go on mission with the poor, but which poor?”

On mission with the poor

It was a discussion with Sr. Jacqueline Boudreau that led her to redirect her focus. “I know some poor people. I have some I want to introduce you to and in fact, they are in Haiti.” Concerned and still a little fearful in the face of all the unknown aspects (language, culture, etc.), Sr. Françoise questioned herself. The call to go and work with the poor, even if she did not know them, was stronger. “I have the chance to start something new.”

The adventure for Haiti begins. The six-month experience turned into an eight-year mission. In fact, it became a love affair from the moment she arrived on Haitian soil. “As I stepped off the plane, I felt the warmth envelop me. I felt like kneeling on the ground. I felt like I had just arrived in my new family.”

Following a sabbatical year, she took time to take care of her ailing parents.  Sr. Françoise then found herself on the Missions Sector coordination team. In that role, she went to Brazil and also to Haiti to see and support the relief project which is now coordinated by the Little Sisters of St. Theresa.

However, in 2008, she left for a new mission, this time in Brazil. She initially arrived in Brasília for her period of immersion, and then joined the project in São Paulo before going, a year later, to Maceió where the Centro Social Madre Maria Rosa (CMMR) took shape. This Community Center focuses on adult literacy and addresses current needs. The team in charge, composed of two Brazilian women and one man, does a remarkable job, according to Sr. Françoise. The Center also offers activities to empower women and support youth. 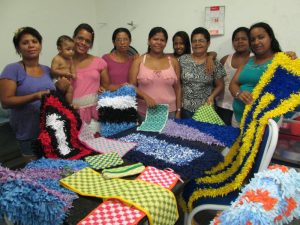 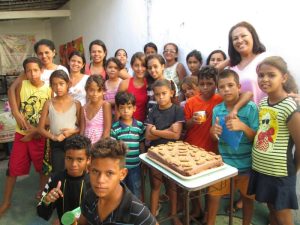 Mission has no age

Sr. Françoise is aware that there have been changes since her departure in 2019. Expectations are different, the place has changed while the team relies on new people. The goal of this new mission trip to Brazil, at age 78, is very clear to Sr. Françoise. “I am going to work to hand over this project to the Brazilian people, undertake the administrative steps, create a board of directors…” She will, of course, support the existing team members with the help of Sr. Joanne Pundyk who assumed the coordination during her prolonged absence due to the pandemic.

The one-year mission could be extended, taking into account unforeseen administrative elements and the current situation at the time. During her mission, she will feel very supported, even from afar, by her Sisters at Maison Jésus-Marie. “These past few years, I have had a wonderful experience with the Sisters in the third-floor infirmary. I know they will pray for me.” 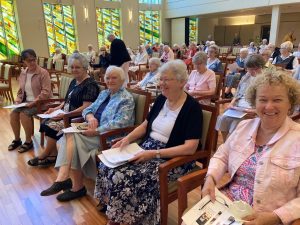 The Lord Jesus invites us to follow Him and give food to the hungry. Sister Françoise Bernard desires to respond in a special way by going to serve in Brazil.