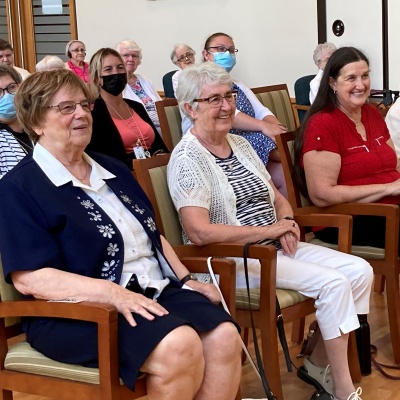 The presentation of the members of the canonical trio responsible for the Saint-André pavilion of Maison Jésus-Marie (MJM) took place during a joyful and light-hearted atmosphere last June 27. It must be said that the Sagouine*, characterized by Sr. Lorraine Beauchamp, played her role to perfection. 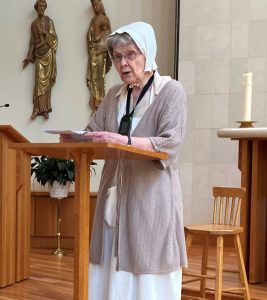 Mandated to explain the process that led to the formation of the new trio of leaders, the character of “La Sagouine” used creative words to tell the story of the process in a clear and simple manner. With her creative language and touch of humor, she presented a short story about each of the new leaders by highlighting their qualities and experiences.

Then, Sr. Marie-Paule Demarbre, coordinator of MJM and animator of the gathering, explained the role of these new leaders of the pavilion. “This trio assures, in shared responsibility, a presence to the Sisters and the animation of their group. They work in close collaboration and meet regularly to make decisions,” she said. 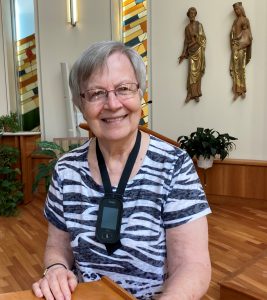 This new trio is also responsible for “adapting and implementing the community, spiritual and missionary animation project developed by the teams of the two pavilions (Saint-André and Saint-Charles) in collaboration with the coordinator of Maison Jésus-Marie.”

Sr. Marie-Paule continued her intervention by making official the function of each one. Sr. Jacqueline Longtin was given the responsibility of presence to  the Sisters. Sr. Jacqueline Aubry is responsible for the animation of the community group.

The whole aspect of the external mission, activities and community services is in the hands of Mrs. Marianne Daudelin. This is the first time that a lay person has been appointed as the canonical leader of the Saint-André Pavilion.

The meeting concluded with the SNJM Provincial Leadership Team (PLT), composed of the provincial animator Sr. Denise Riel and the other team members, Srs. Claudette Bastien and Lisette Boulé blessing the new trio. In addition to those mentioned above, this event held in the Chapel, also included the members of the administrative services of Maison Jésus-Marie, the Sisters of the Saint-André Pavilion and the 17 Sisters of the Congregational House who will come to reside at MJM in August. 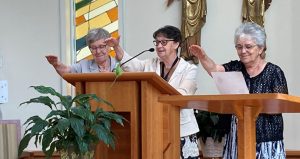 *La Sagouine: This refers to the character in the play written by Antonine Maillet in 1971. This character inspired by an Acadian woman, represents the working class in Acadia. Portrayed as a cleaning woman, she shares her thoughts by bringing forth the realities experienced by her people in a style that is both creative and poetic.