The SNJMs Are More Than Ever On a Mission!* 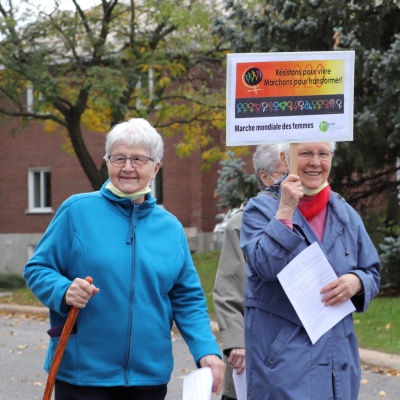 Nurturing children’s self-esteem through the arts, offering support and humane ways of living  to women victims of domestic violence or experiencing homelessness, supporting the demands of women and Aboriginal people, actively collaborating in the fight against human trafficking, denouncing racism and the war in Ukraine, are some of the causes supported by the Sisters of the Holy Names of Jesus and Mary (SNJM).

The SNJMs have long been pursuing their work as educators in different ways. Inspired by the spiritual heritage and committed journey of their foundress, Marie-Rose Durocher, the Sisters have been open to responding to the needs of today. Alone or in collaboration with others, the SNJMs are involved in many causes with a common denominator: to promote the full development of the person.

Despite the advanced age of many of them, you can see their enthusiasm when knitting sweaters, tuques, mittens and even little vests for premature babies. Beyond their pride in presenting their handiwork, they are even happier to see the fruit of their work benefit various organizations that take care of homeless people, children and families in disadvantaged areas (Entraide chez-nous, Fondation Dr. Julien, etc.). Year after year (like during the years of the pandemic), the SNJM donate several boxes of knitted goods and a few thousand dollars accumulated during their exhibition sale. 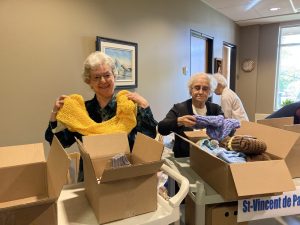 This ardent desire to help people has taken on new forms in recent months with “Operation Shoebox” for women experiencing homelessness or domestic violence. During their initial participation, the Sisters filled about sixty shoe boxes, to which were added about thirty others from employees and partners whom they were able to rally to the cause. They also participated in the “Mother’s Day cards” operation, initiated by the same organization, in order to bring some comfort to women victims of violence. 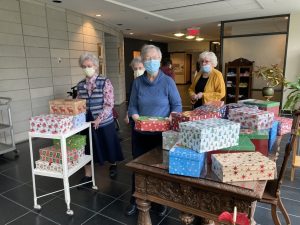 SNJMs made dozens of shoeboxes, filling them with various useful items to help women experiencing homelessness.

Some 268 actions, either through prayer or education, were undertaken by the Sisters whose average age is 85, at Maison Jésus-Marie. This special campaign, organized as a prelude to the World Day of Prayer and Reflection against Human Trafficking on February 8, motivated SNJMs from all the regions to pass the 600-action mark in 20 days. It supports the Corporate Stand Against Human Trafficking adopted in 2004. It should also be noted that some Sisters are still working within the Action Committee Against Internal and International Human Trafficking (CATHII), founded by several religious Congregations in Quebec.

The Justice Committee of the Sisters of the Holy Names of Jesus and Mary of Quebec worked in conjunction with the Manitoba Justice Committee to organize a virtual conference in February with representatives from three Aboriginal communities. The purpose of this event was to sensitize the Sisters of the two Canadian provinces to the reality of Aboriginal peoples. The conference was a great success and is still being utilized by the members of the Justice committees to deepen their understanding.

The 5th World March of Women last October could not be ignored. Unable to participate in the demonstration in Montreal, due to health regulations, the Sisters at Maison Jésus-Marie, accompanied by SNJM associates, employees and partners marched on the heritage site. They clearly expressed their support for the demands of the event. After singing the theme song along the route, they gathered for a ritual in the chapel. Since the first event of the Women’s March in 1995, when a few SNJMs walked the route from Montreal to Quebec City, several Sisters have participated in this world-wide event which is held every five years.

Some SNJM Sisters participated with other religious Sisters in the World March of Women in Montreal in October 2021.

A mission expressed in several ways

The educational mission is also expressed through the support of promising initiatives. This is the case with the programs to raise awareness of music among young people at the Orchestre symphonique de Longueuil. The offer of a concert hall to university students, allowing them to present their program in front of an audience before their exams, is another form of significant commitment. 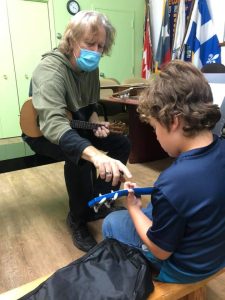 The Maison des enfants Marie-Rose supported by the SNJMs offers many activities, including music classes, to youth in the Beauharnois area.

Among the other initiatives supported by the SNJMs, we must highlight the work done by an SNJM Associate and her collaborators at Maison des enfants Marie-Rose in Beauharnois. The focus on the arts and complementary activities to meet the needs of the community, contributes greatly to the development and enhancement of young people who are often left to their own devices.

Beyond these actions and many others that we cannot list here, the commitment of the SNJMs is also manifested in their Corporate Stands on Water as a Human Right in the perspective of integral ecology with Laudato Si’, as well as in favor of Migrants and Refugees. At the same time, the Sisters of the Holy Names of Jesus and Mary use their collective voice to denounce or support demands. The two most recent statements concern racism and the war in Ukraine.

As we celebrate the 40th anniversary of the Beatification of Marie-Rose Durocher in 2022, it is clear that the SNJM Sisters are still following in her footsteps. Just as she did in her time, the SNJMs are sensitive to current needs and find ways, alone or with others, to respond to them.

*This article was originally written for the publication Rencontre (Volume 12, Issue 39-June 2022 – in French only).