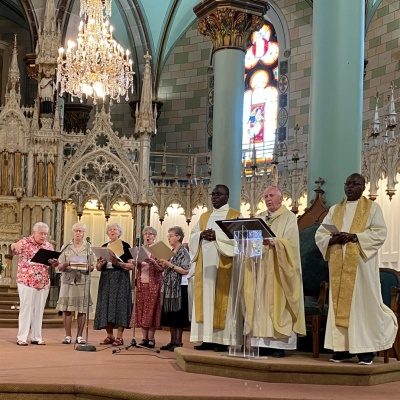 On the occasion of the 40th anniversary of the Beatification of Marie-Rose Durocher, some thirty people responded to the invitation to participate in a silent pilgrimage. These pilgrims joined a few hundred others to attend the Mass at the Co-cathedral of Saint-Antoine-de-Padoue, in Longueuil. 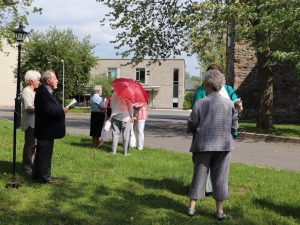 The Mass was presided over by Bishop Claude Hamelin who identifies himself as a “spiritual son” of Mother Marie-Rose. He was accompanied by Father Charles Mangongo, r.s.v., pastor of the Pastoral Unit of Vieux-Longueuil, and Father Pascal Lemene of the Parish of Saint-Jean-Baptiste-de-la-Salle in Montreal (a parish where the SNJM Congregation ministered for approximately a hundred years). 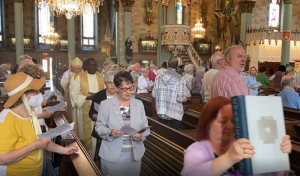 At the beginning of the Mass, Sr. Denise Riel, provincial animator of the SNJM’s in Quebec, reminded us that, just like society, “the Church celebrates people who have had an outstanding influence in their environment. “The Beatification of Marie-Rose Durocher by Pope John Paul II on May 23, 1982 is a recognition of the “value of a woman committed to God and to others. A woman who, through her commitment to educate young people, especially girls, “was already working to promote the status of women,” she said.

Beautiful tribute to a “woman with fire in her heart”

The homily by Father Charles Mangongo paid a beautiful tribute to Marie-Rose Durocher, a figure who continues to inspire the world.   Referring to the following texts by: Albert Tessier (Une fleur du Richelieu), Sr. Yolande Laberge (Sur les pas de Marie-Rose) and an article by Sr. Simone Perras, he highlighted the exemplary journey of Mother Marie-Rose, “a woman with a heart of fire.

With a simplicity that reflected the foundress of the Sisters of the Holy Names of Jesus and Mary (SNJM), the Mass was enhanced by hymns sung by a choir comprised of Sisters Marthe-Gisèle Beauchamp, Madeleine Marchand, Françoise Bernard, Lisette Boulé and Constance Létourneau, who were accompanied by the organist, Peter Binse. 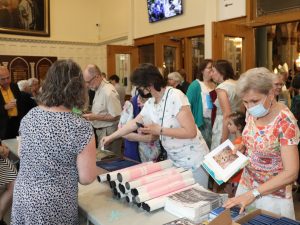 Following the celebration, the parishioners and Sisters gathered for conversation and refreshments which included a glass of punch.  Various articles, books and relics were made available to be taken.

Since 2004, the tomb of Blessed Marie-Rose is located in the Marie-Rose Chapel, located in the right transept of the Co-cathedral. For the occasion of this 40th anniversary, the chapel was refurbished to display some artifacts related to the history of this pioneer and the Congregation. There are also two new posters, equipped with QR codes, to give access to multimedia content (texts, photos, videos, podcasts) that will be updated over time. Other posters will complete this redesign in the coming weeks.