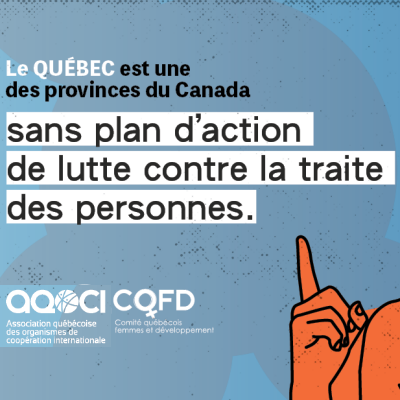 Phase 2 of the Action Committee Against Internal and International Human Trafficking (CATHII) campaign has collected approximately 100 new supporters. Of these, 25% are Sisters of the Holy Names of Jesus and Mary (SNJM) and some of their staff members. This was enough to reach the goal of over 1000 signatures in support of the call for a Provincial action plan to cover all forms of human trafficking.

This second block of signatures was emailed, on December 15, to all Provincial Members of Parliament making them aware of the situation. Hard copies were mailed to the offices of Premier François Legault and Deputy Premier Geneviève Guilbeault.

In addition to having reached the goal of 1000 signatures, CATHII is pleased with the initial steps toward collaborating with the Association québécoise des organismes de coopération internationale (AQOCI) | (Quebec Association of International Cooperation Organizations).

This Association brings together some sixty organizations that are within  several regions of Quebec. It has initiated an attractive visual campaign, on social media, to promote the fight against human trafficking.

This new collaboration allows us to reach more people and could lead to many more successful actions in the future.