Enchantment and Joy for the Holiday Season 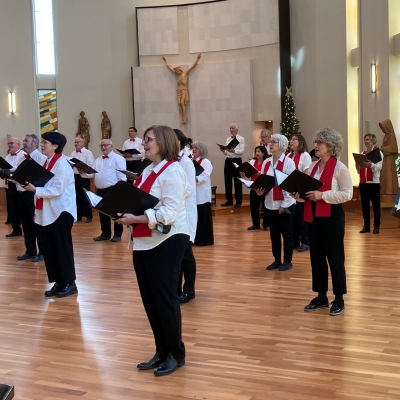 At the beginning of December, before the return of new health regulations, two concerts were presented in the chapel of Maison Jésus-Marie, to the great pleasure of the residents. 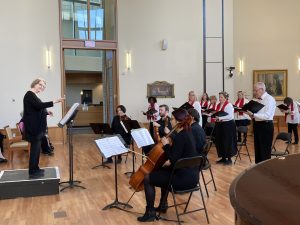 The Chœur de l’Arthémuse presented an enchanting program of Christmas carols. This vocal ensemble, created in 1993 at Collège Durocher Saint-Lambert, is comprised of 50 choristers (mixed voices). Under the direction of Ms. Giseline Pelletier, and accompanied by a few musicians, the chorale, mainly adults (teachers and friends), demonstrated their ability and talent. 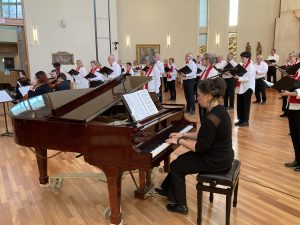 Due to the large choir, a limited number of spaces were reserved for the audience The resident Sisters watched the concert on closed circuit TV. 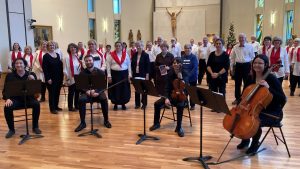 Maryse Moisan SNJM reunited with Monique Poirier, her former student, at this concert presented at Maison Jésus-Marie. It had been 40 years since they had last seen each other.

“She was also in the Collège Durocher orchestra and played the cello,” fondly recalls Sr. Maryse, who was thrilled to once again meet this talented musician. “She had presented one of her own compositions, Fantaisie en trois mouvements. (Fantasy in three movements). I remember it being very lively.“ 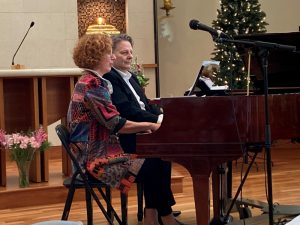 The program, presented by Monique Poirier and Yves Garand, was filled with traditional Christmas pieces. This was one of the rare times that the Sisters attended an organ and piano concert.  The two musicians now and again played together at the organ and also alternated playing solo at the piano and the organ.

The pleasure of the two musicians playing together was greatly felt by the audience who was captivated by the various tunes that were played with exceptional mastery. 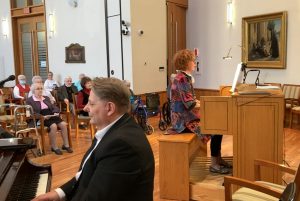 These two concerts delighted everyone and provided wonderful memories on the eve of another special holiday season.

Short excerpt from the performance of the vocal ensemble Arthémuse