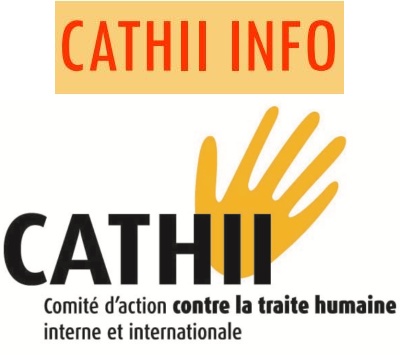 There is no shortage of action at the Action Committee Against Internal and International Human Trafficking (CATHII). The most recent newsletter, available in French and English, reports on several actions taken. Among other things, we learn that a letter has been sent to provincial elected officials to remind them of the importance of the fight against human trafficking and that a participatory research, on the empowerment and reintegration of victims of human trafficking, is underway.

In addition, the organization, created in 2004 by several women Religious Congregations, presented its annual report in mid-November (in French only). It contains more detailed information on participatory research. It recalls the initiative of the CATHII-University project at the UN, highlights the work in collaboration with several organizations, including Talitha Kum, and gives news of the Quebec Coalition Against Human Trafficking. Despite the COVID pandemic, several actions have been taken to continue the fight against human trafficking.