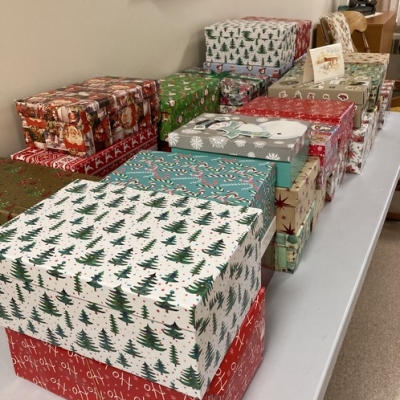 The enthusiastic participation of the Sisters of the Holy Names of Jesus and Mary (SNJM) and the staff at Maison Jésus-Marie, the Provincial Administration (Quebec) and the General Administration had a major impact on the success of Operation Shoebox in the Montérégie area of Quebec. The combined efforts of the entire SNJM group resulted in the collection of some 91 shoeboxes.

This contribution represents approximately 12% of the total number of boxes collected this year in the Montérégie. This is quite remarkable considering that the SNJM group participation began ten days after the campaign had begun.  It was the first time they had taken part. 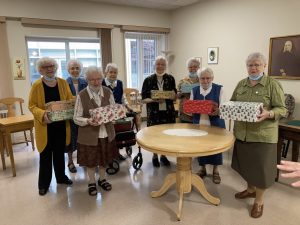 As soon as Ms. Roxane Gagné, regional manager for the Montérégie, presented the project, a high energy was palpable as evidenced by the enthusiastic desire to participate.

Judging by the comments heard here and there, there was a great desire to bring a little joy and happiness to itinerant and homeless women in these areas. This is what quickly fuelled this surge of solidarity. Many people also took advantage of the campaign to learn more about this multifaceted reality.

Homelessness remains a difficult topic to talk about, often causing uneasiness and discomfort during casual encounters with itinerants and homeless people. Yet, simply looking them in the eye and saying “Hello” is comforting to them,” noted Ms. Gagné during her presentation.

Operation Shoebox is a ten-year-old initiative. Created by the Mulroney sisters-in-law in Toronto, the campaign quickly spread throughout Ontario before crossing the border to Montreal and the Montérégie region. The idea is to gather various essential items and gift objects worth up to $50 and to put them into a decorated shoebox.

The 2021 objective in the Montérégie was 615 boxes. This was an ambitious goal since the previous two years, 400 boxes had been collected. The addition of partners, such as the Centre diocésain Saint-Jean-Longueuil, through which the SNJMs had been made aware, contributed greatly to the success of Operation 2021.   Over a hundred shoeboxes were collected. Many families and parishes became more sensitized to the plight of homeless women and thus to the goal of this mission.  Other people contributed directly to the main center. 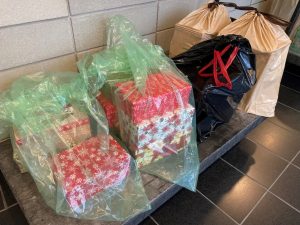 According to the most recent unofficial data, Operation Shoebox in the Montérégie collected 726 boxes which were delivered to 26 shelters offering services to homeless women in the Montérégie region, from Valleyfield, Akwesasne, Kahnawake, Granby, Cowansville, to Saint-Hyacinthe, Saint-Jean-sur-Richelieu, Sorel-Tracy and Longueuil.