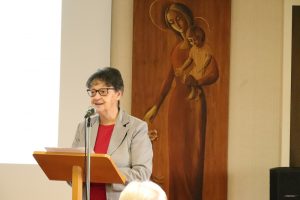 The members of the Quebec Leadership Team (PLT) met with four distinct groups to present the priorities for action during the year 2021-2022.  Unveiling the theme for the year “Daring to Respond to the Call“, they encouraged the Sisters to reflect on how they might commit to a personal and communal response to the first orientation of the Acts of the 35th General Chapter held last July.

This first orientation invites us to “adopt new worldviews, attitudes and ways of being through encounters with a diversity of peoples, cultures, faith traditions and collaborators in mission.”

What personal and communal response will we dare to make to the call to encourage encounters with others who are different from us, in order to better know and understand the other’s history and culture? 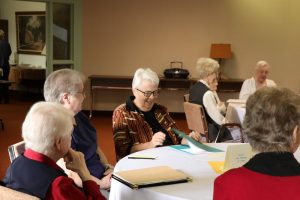 The small-group format favored stimulating exchanges among the participants and allowed them to further explore and share their comments regarding this first orientation and possible follow-up to the Acts of the General Chapter.

It was mentioned that “when we encounter the other in a spirit of kindness and compassion, that encounter transforms our ways of being and doing; and makes place for a new vision of other people and of the world.”

During these meetings, the members of the PLT recommended that the Chapter Circles be continued and even expanded. These virtual small-group gatherings brought together Sisters, Affiliates and partners to explore the themes proposed in the Chapter process. The recommendation has several aims, among which are: to increase a sense of belonging by providing topics for conversation and dialogue; and to continually seek to educate ourselves and develop “new worldviews”.

It should be noted that, due to Covid protocols, these four meetings replaced the traditional Fall provincial gathering. 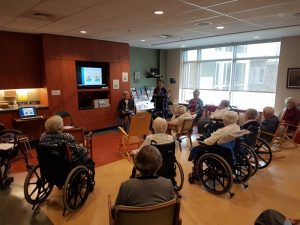