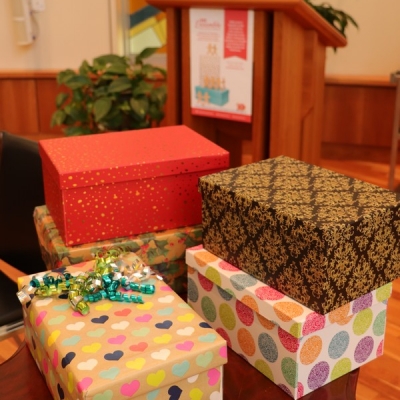 The Sisters of the Holy Names of Jesus and Mary (SNJM) of Quebec have joined the Diocesan Centre in supporting the Shoebox Project to help homeless women. The effort, which is accepting donations until November 25, aims to collect shoeboxes containing essential items and gifts for homeless women, and will be distributed by 26 shelters in the Montérégie region. 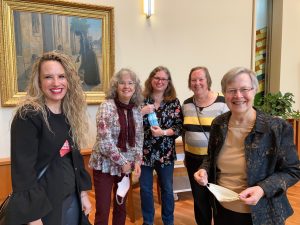 At information session, on November 11 at Maison Jésus-Marie, Mrs. Roxane Gagné, the head of operations for the Montérégie, recalled the creation of the organization ten years ago by the Mulroney sisters-in-law in the Toronto area, and spoke of the importance of this annual campaign for homeless women.

“It is often the only kindness these women receive during the holiday season, which is an extremely difficult time for them.” Sharing a few comments and anecdotes from her involvement over the past few years, Ms. Gagné insisted on the importance of the effort for these women. “They often feel invisible to passers-by, who have difficulty saying a simple hello to them on the street.”

While the contents of the shoeboxes include many daily necessities, it’s the addition of a greeting card or a little non-essential gift that can make each woman feel special and give them hope. Among other things, Ms. Gagné recalls one woman who confided that when she feels very alone, she touches the little pendant she received to remind herself that someone, somewhere, has thought of her. These little touches are just as important and give a little comfort and dignity to these homeless women. 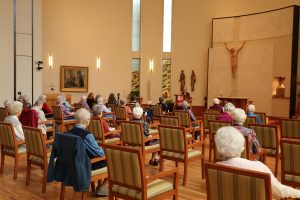 The 2021 edition the Montérégie Shoebox Project aims to collect some 615 boxes. This is an increase of more than 50% compared to the last two years. While this objective might seem ambitious, the addition of new partners such as the SNJM and the Diocesan Centre, which is serving as a collection point for the shoeboxes, bodes well. This is especially true since the Sisters are promoting it within their own network, specifically with the staff of Maison Jésus-Marie and the provincial and general administrations.

Those interested in donating to this campaign have until November 25th. For more on the preparation of the boxes and their contents, please visit the Montérégie section of the Shoebox Project website.