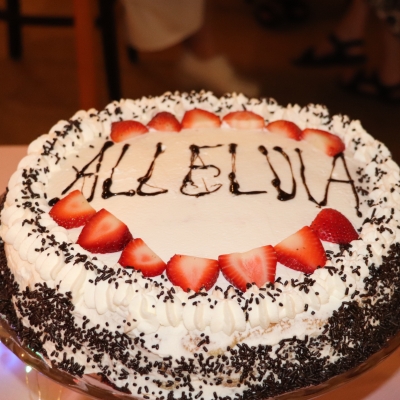 A festive meal was organized at the Congregation House to mark the end of the 35th General Chapter of the SNJM on Thursday, July 29. Six sisters from Quebec who were delegates to the General Chapter — Jacqueline Aubry, Jacqueline Boudreau, Lise Bluteau, Lisette Boulé, Claudette Bastien and Denise Riel — joined the twenty resident sisters.

For the occasion, a special menu was prepared by the chefs of the Congregational House. The atmosphere was festive. The affectionate exchanges between the sisters were joyful. They discussed the Chapter’s most intense moments, the evocative rituals as well as the theme song composed by the singer-songwriter Robert Lebel. Happy in the moment, many extended their meal to savour the occasion…

The Hospitality Department of SNJM’s General Administration took the initiative for this festive meal. Sr. Lorraine Mongeon, in charge, wanted to thank the delegates from Quebec for their participation in this important event. It was also a beautiful way to end the two intense weeks — lived to the fullest — by all the SNJM sisters who had online access to many parts of the Chapter.

Some of the delegates from Quebec stayed at the Congregation House during the 35th General Chapter which was held under the theme “The Call of our Lives”. They were able to enjoy the encouragement of their sisters as they shared the evening meal.