Huguette Fleurant’s Intercultural Residence: A Welcoming Environment in Which to Grow Together 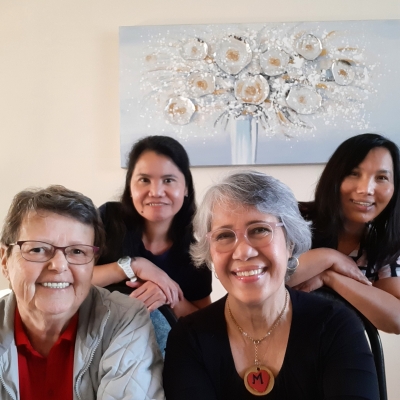 In her presentation on her intercultural residence where she lives with migrant and refugee women, Sister Huguette Fleurant discussed the challenges the residents face on a daily basis. In her straight-forward and good-humoured way, Sister Huguette shared the story of this multi-cultural communal living project that she could not have imagined when she arrived in Manitoba seven years ago. 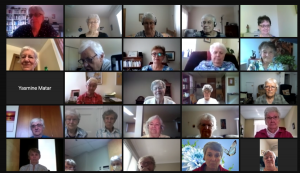 A partial view of all those present during Sister Huguette Fleurant’s remote presentation.

“God was waiting for me there.” Sister Huguette explained how, after a year’s sabbatical to learn English at the House of Peace organization in Winnipeg, she initiated this project of welcome and sharing. “I discovered my mission,” she revealed, enthusiastically underlining that this project is about communal living, prayer and sharing.

People who take part in this communal living situation do not do it for financial reasons. Everyone pays their share for accommodation, food and services. “We have the motivation to build something: a welcoming environment,” she said.

“We feel helpless in the face of their story.”

The residents — some of whom have suffered extreme poverty and/or domestic abuse, or gratuitous violence in refugee camps where they lived – had the strength to act. “We come together to speak out and to be heard,” says Sister Huguette. 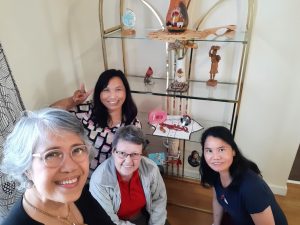 Lia, Sister Huguette, Jenny and Esther, in the back.

This residence, that receives no government support, has brought together women primarily from the Philippines, Myanmar and Eritrea. Strong and determined, these women each come with their own cultural baggage and have had to adopt English as their lingua franca to communicate amongst themselves. Still, they have no illusions that it’s easy to translate all the subtleties of each woman’s life in a language that is not their own.

The challenge, however great, has the merit of forcing people to pay better attention to each other — to make that extra effort to understand each other and it’s all the more challenging because everyone has had different experiences. Sister Huguette admits, “You feel powerless in the face of their story,” referring to the “deep sadness” expressed by those who have witnessed soldiers kill refugees in camps for no reason.

This project is an opportunity to better understand the reality of migrants and refugees who are forced to flee their homes because of poverty, malnutrition, political conflict and other reasons. “These marginalized people did not choose to be vulnerable.”

The beauty of the project is the participants’ determination to be attentive to “the nuances of other peoples’ cultures.” Despite the constant challenge to understand each other, the residents clearly express their desire to “live together to go deeper into the others’ culture.” This requires openness and patience to stay attuned to what is being said and to give extra space to each others’ experiences. This desire is also fueled by their belief in God. 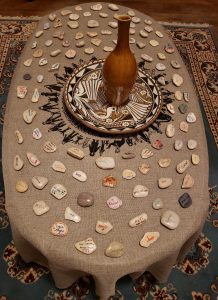 A table of prayers stones.

The home’s monthly schedule includes a group prayer meeting. It’s a time to stop and remember those in need in their prayers. Conflicts within the home are managed as they arise. It is out of the question that a disagreement remains unresolved, which forces all participants to speak openly and to reconcile their differences quickly.

Beyond the everyday challenges of communal living, there is also the richness of sharing, the learning of new skills and the natural generosity that each person brings. This desire to “walk together and grow together” is in keeping with the spirit of Emmaus.

This cross-cultural project was made possible with the support of SNJM leadership teams from Manitoba and Quebec — from its inception. The close relationship with the Winnipeg community, in particular with Lesley Sacouman’s network of contacts at House of Peace, facilitated many things, including moving from one house to another and setting it up.

Sister Huguette made her presentation remotely to about fifty sisters and SNJM affiliates during the last meeting of the year of the SNJM Justice and Peace Committee in Quebec. At its conclusion, several members of the audience applauded her courage, openness and her personal growth. “Bravo for having been able to integrate with other cultures and in another language” expressed one of them, and the provincial leader of Quebec concluded by saying “I thank you for what you have become.”