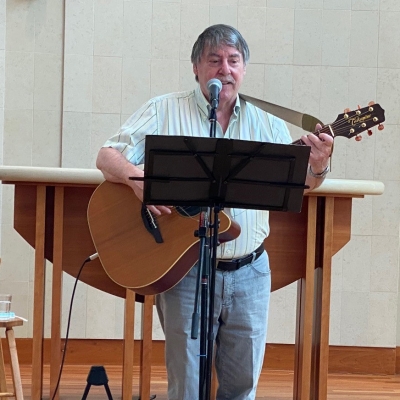 More than 400 people attended the Robert Lebel concert presented as part of the 35th General Chapter of the Sisters of the Holy Names of Jesus and Mary (SNJM) on Sunday, July 25. The event required considerable technological prowess for those watching remotely, including a closed-circuit broadcast and live-streaming, in addition to those present in the chapel of Maison Jésus-Marie, in Longueuil, Quebec, where the concert took place.

Invited to lead a spiritual pause in the middle of the General Chapter schedule, Robert Lebel, a priest and singer-songwriter for more than 40 years, was very happy to reconnect with the public. “This is the first time we have performed in front of an audience in 18 months,” he said. He was a bit nervous before starting his rehearsal with long-time pianist-accompanist Sylvie Payette, a former student of l’École de Musique Vincent-d’Indy, an institution created by the SNJM.

Judging from the reactions of those present and the comments from all over, Robert Lebel’s concert was “a moment of grace”. One of the audience members admitted that she sang along with all the songs, including, of course, the theme song of the 35th General Chapter, “The Call of our Lives.”

Lebel performed many well-known songs from his repertoire to which the audience followed along with arms raised, and then gave him a hearty round of applause.

In addition to the sisters present, SNJM affiliates and partners from around the world also felt the joy of the composer’s music. “I experienced this moment as an hour of prayer,” expressed one audience member. For many, this was a much-needed pause of levity during this time in which the Congregation is facing the many challenges of the future.

Some pictures of the concert